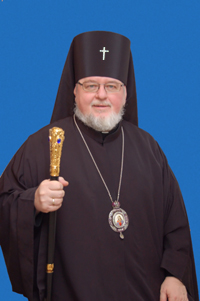 SYOSSET, NY [OCA] On October 7, 2020, Archpriest Alexander Rentel, Chancellor of the Orthodox Church in America, made the following statement with the blessing of His Beatitude Metropolitan Tikhon:

On Friday, October 2, 2020, His Eminence Archbishop David of Sitka and Alaska informed His Beatitude that he has received a diagnosis from his doctors in Anchorage of renal cancer. On the advice of his doctors, and with the blessing of His Beatitude, His Eminence has decided to travel to Indiana, where he will undergo further testing and eventual treatment at the Indiana University School of Medicine in Indianapolis, while living with his son, and his son’s family. His Eminence made a formal announcement to his diocese this past weekend about his condition, which has been subsequently posted on the diocesan website. Faithful are directed to visit this website for regular updates on Archbishop David’s health.

His Beatitude requests prayers from the faithful of the Orthodox Church in America to the Almighty God, the Physician of our souls and bodies, for His Eminence, his family, and the medical workers who will treat him.