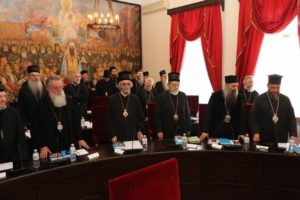 The Holy Synod of Bishops of the Serbian Orthodox Church began its work on Tuesday, November 6, 2018, at the Synodal Hall of the Patriarchal Palace in Belgrade.

The Serbian hierarchs gathered to examine the issues on the agenda under the chairmanship of His Beatitude Patriarch Irinej.

New Statutes for the Church’s organization

We recall that at a previous session of the Bishops’ Synod, the question of changing the statutes for the organization and functioning of the Serbian Orthodox Church was raised.

One of the changes announced was the addition of the phrase “Patriarchate of Pec” to the official name of the Serbian Church.

Changes to the official name of the Serbian Church explain the desire to strengthen relations with its historical centre of the Patriarchate of Pec, but also with the Kosovo and Metohija regions as jurisdictions of major importance.

Many of the most significant Serbian Orthodox churches and monasteries are located in the Kosovo area, which includes the Pec / Peje patriarchal ensemble and the Gracanica and Decani monasteries, which are among the UNESCO heritage monuments.

New procedure to elect the Patriarch

It also provided for an update of the election procedure for the Primate of the Serbian Orthodox Church, given that the Serbian Church leader is currently elected by a system that involves the random selection of one of the three envelopes containing the names of the candidates.

Elevation of 13 dioceses to the rank of metropolis

If the new statutory act is adopted, thirteen dioceses will be elevated to the rank of Metropolis: Banja Luka, Bačka, Braničevo, Dalmatia, Žiča, Zahumlje and Herzegovina, Niš, Raško-Prizren, Srem, Šumadija, Canada, Novo Gracanica and the Middle West of America, Frankfurt.

Given the latest statements in the press, it is most likely that the Synod will also discuss the ecclesial situation in Ukraine.