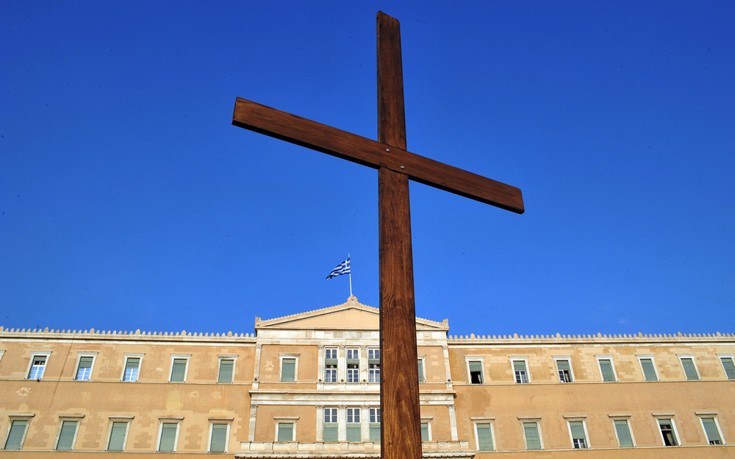 The cross in front of the Greek Parliament in Athens. File photo

Senior members of the Greek Orthodox Church expressed their opposition to the historic agreement between Prime Minister Alexis Tsipras and Archbishop of Athens and All Greece Ieronymos to remove some 10,000 priests and auxiliary staff from the state payroll.

The agreement, reached on Tuesday, foresees the setup of a special fund to handle church assets, and changes in the salaries of clerics, who will no longer be civil servants but will be paid by the church through an annual state subsidy.

Archbishop Ieronymos was forced to backtrack on Wednesday, stating what was announced on Tuesday was not an agreement but an “intention to agreement.”

Fr. Vamvakidis said that the agreement will be opposed by the vast majority of the bishops throughout Greece, and noted that Archbishop Ieronymos did not have the authorization to sign such an agreement. He also sent a message to Greek MPs stating that whoever votes in favor of the agreement will lose the votes of the country’s priests.

According to the announcement issued by the clerics’ union on Tuesday night, ”the reaction is going to be massive and unprecedented in Greece’s history”.

Government spokesman Dimitris Tzanakopoulos said that “the aim of the agreement is to create a framework for settling historically outstanding issues.”

“For the first time since the establishment of the Greek state, there is an attempt at a resolution, not through unilateral actions but through an agreement between the Church of Greece and the Greek State on an equal basis, following a sincere dialogue conducted in good faith to settle the issue of the Church’s assets,” Tzanakopoulos explained.

Details of the agreement

The first pillar of the Agreement stipulates that the Greek priests will no longer be civil servants.

This means that from now on, clerics will go off the civil service payroll and will be paid by an annual subsidy from the state, which equals the current payroll of active priests. This subsidy will be adjusted in tandem with payroll changes of the Greek State and it will be paid into a special Church fund earmarked exclusively for the priests’ payroll. The Church of Greece will be responsible for the management of the subsidy, and it will be overseen by the appropriate State authorities. If the Church decides to increase the number of its clerics, the State will not be obligated to raise the subsidy.

The second pillar deals with the Church’s assets. The agreement foresees the formation of a “Church Asset Development Fund” that will be set up with joint management by the Greek state and the Church of Greece.

The Fund will be managed by a five-member committee consisting of two Church appointees, two State appointees, and one joint appointee. The assets it will manage include all those whose ownership has been an issue of contention between the Church and State since 1952, as well as any asset the Church wants to transfer to the Fund voluntarily. The revenues and obligations of the Fund will be shared equally between the two sides.