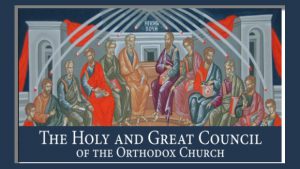 Amid all the speculation in the media concerning the upcoming Holy and Great Orthodox Council, and of the many opportunities and challenges that it will confront, it is only natural for Orthodox faithful to be hopeful but also apprehensive. Will the Council, is a question often heard, turn out to be Orthodoxy’s greatest moment in the modern era? What about the key issues that confront the Church? Will the Council be successful in resolving them and help guide the Church into a more productive tomorrow?

With respect to the first question, all indications are that the Council will indeed be an unqualified success. The Primates of all autocephalous and autonomous Churches will be attending, along with nearly 500 Orthodox bishops and lay theologians from around the world. The presence of such an eminent gathering of Orthodox clergy and laity, deliberating under the guidance of the Holy Spirit, should provide sufficient evidence of the unity in faith that is characteristic of the Orthodox Church.

However, as a forum for resolving the problems that confront today’s Church the outlook appears less promising. At most, the Council will address and resolve only about half the topics on its original agenda, deferring the remainder for a later date. To be sure, topics expected to be approved do address issues of major import, such as the mission of the Church, its relationship to the rest of the world, the importance of fasting, and the impediments to marriage. Postponed for future consideration, however, are four equally important topics, whose resolution is urgently needed. They concern the canonical restructuring of the Orthodox Diaspora (an after effect of the mass migrations of Orthodox faithful during the past century); the rules for granting Autocephaly; the adoption of a common Calendar; and the updating of the Diptychs of the Church.

The reason for the Council’s inability to resolve all items on its original agenda can be traced to several factors. For one, during the deliberations of the Council all decisions will be made by “consensus’ of all Primates, meaning that all Primates of the autocephalous Churches will have to agree on a given issue. When even one Primate disagrees with a particular decision, it will not be enacted. Decisionmaking by consensus, which admittedly is not particularly conducive to problem solving, was adopted at the request (insistence would a better term to characterize it) of the Russian Patriarchate.  Our own Patriarchate favored a system of free discussion, with dissenting views being heard and recorded prior to reaching decisions.

The requirement for “decisions by consensus” is further complicated by the organizational structure of the Churches in the Orthodox East. As is well known, the Orthodox Church consists of fourteen “autocephalous” or self-governing Churches, that although organizationally separate are in full communion with one other on matters of faith, sacraments, and canonical discipline. They are also equal to each other, regardless of size or importance. Geographically, the fourteen Churches extend across the entire Eurasian continent, Africa, and the Middle East, and as such include faithful of varying ethnic and cultural backgrounds. Not surprisingly, their views especially on matters of Church administration and structure tend to differ at times, a fact which is reflected when attempting to secure a consensus on a particular issue by all fourteen Primates.

The honorary role of our own Ecumenical Patriarch as the “first among equals” is not helpful in this regard, either. His title merely confirms that he is first in standing and importance among the other thirteen Primates that are equals to him, but has no power to impose a decision or point of view on them. With an honorary title only, the Ecumenical Patriarch has no authority over the operations of any of the autocephalous Churches other than his own, and except for convening and chairing meetings of Primates of the Church and mediating controversies between them (when asked) has little additional authority.

It is all so very different from the way our Christian brothers in the West are organized. Theirs, the entire Catholic Church is structured as one, with the Pope in a leadership position as the head of the Church, whose authority is unchallenged. A government bureaucracy (the Roman Curia) runs the entire Church; and Cardinals and bishops are appointed by the Pope, to govern local areas under his direct authority.

Recently, while announcing the convocation of the Great and Holy Orthodox Council, Ecumenical Patriarch Bartholomew spoke openly of the need for the Orthodox Church to settle first their internal matters before speaking to and addressing the world. The reference undoubtedly was to the long-standing need to reunite Christ’s Church by reconciling the differences that currently separate East and West. As welcome as this initiative is, one cannot help but wonder how a Council in the year 2020, or perhaps later, would be able to address the fundamental doctrinal and other issues that separate the two Churches, if its every decision will have to be made by the consensus of the heads of all its 14 autocephalous Churches. There has got to be a better way.

Dennis Menos is the author of The Justinian Diaries, a historical novel that focuses on Hagia Sophia in Constantinople. He can be reached at [email protected]