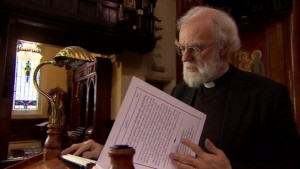 Christianity has a history that most of us know little about. A history that spreads eastward as well as westward, writes former Archbishop of Canterbury Dr Rowan Williams for BBC Newsnight.

We would probably take it for granted that someone reading a religious text in Arabic would be a Muslim – but the truth is that you will find plenty of Christians reading their Bibles and books of prayers in the language.

It is a sharp reminder of the diversity that once marked the Arabic-speaking world.

It is a reminder, too, of aspects of Christianity’s history the majority of us have little idea about: a period when there were probably as many Christians in Asia as in Europe.

The familiar story is of the Christian faith moving west, towards Rome – spreading out from there to more remote areas, as far as Britain and Scandinavia, then being spread again outside Europe by missionaries.

But the facts are dramatically different. Christians were active in what is now Iraq and Iran by the 2nd Century. They were in India and the north of the Arabian Peninsula by the 3rd Century.

By the 7th Century there were monks and scholars from Iraq working in China, translating texts and ideas into Chinese and building Chinese-style churches and monasteries.

The Nestorian Stele – an 8th Century stone in Xian – records, in Chinese and Syriac, the arrival of missionaries from Iran. Very soon they were composing poems and philosophical discussions in Chinese.

In the 13th Century, two monks from Beijing – part of a vast church whose centre was in Iraq – travelled to Europe, getting as far as France and meeting King Edward I of England – a Marco Polo story in reverse.

Meanwhile in the Middle East, Christians – speaking and writing Arabic – were a familiar part of the scene in Muslim societies, often referred to in the literature and folktales of the region.

They suffered some serious social discrimination, but were seldom actively persecuted. Often they were doctors, diplomats or entrepreneurs.

It was a situation that continued for many centuries. But Christian communities in these regions steadily shrank in numbers.

And because they were mostly not part of the big European church families – Catholic and Orthodox – as a result of ancient disputes over details of teaching, they had to work hard to make and keep friends and supporters outside the Muslim world.

Late in the Middle Ages, many of these groups suffered genocidal violence at the hands of fanatical Central-Asian warlords like Tamerlane.

It was a hideous foreshadowing of the situation faced by many of their descendants today as they confront the butchers of the so-called Islamic State (IS).

Although IS is mostly focused on conflicts within Islam, the history of the last 15 years or so has reinforced for many the myth that Christianity is somehow alien to the region and allied with Western interests.

Communities that can trace their roots back a millennium and a half to the first four or five centuries of the Christian era are treated by militants as if they had no right to live there.

But these communities are a massively important part both of the Christian family and of the history, culture and intellectual development of the nations in which they live.

Many Christians were at the forefront of Arab nationalist movements in the 20th Century. They stand as a reminder that Christianity is not just about European – let alone American – power, but also of the fact that the Arab and Iranian world is not just Muslim in its history.

The current threat to all Christian communities in Western Asia is a threat that seeks to deny something fundamental to the history of human civilisation – that people of very different convictions can still build a culture together.

That’s why the fate of these beleaguered and abused minorities is an urgent issue for us all.

Newsnight is broadcast on BBC Two, weekdays from 22:30 GMT.