[ditty_news_ticker id="27897"] In the spirit of Veterans’ Day: Eastern Orthodox Priest reflects on “Chaplaincy After the Chaplaincy” 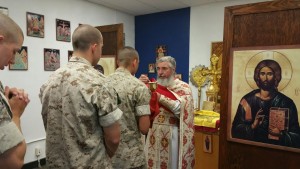 Orthodox recruits participate in the Eucharist.

In the spirit of Veterans’ Day: Eastern Orthodox Priest reflects on “Chaplaincy After the Chaplaincy”

SAN DIEGO, CA [OCA]  “Some military installations are hours away from the nearest Orthodox parish – others are close to a parish but may have policies that void any such convenience,” said Archpriest Jerome Cwiklinski, a retired chaplain who continues to minister to US military personnel.  “Marine Corps Recruit Depot [MCRD], close to the heart of San Diego, is within five miles of parishes of almost every jurisdiction.  This is where half of all Marines go through basic training.  Because recruits are never permitted to leave the base, those parishes might as well be on the moon!”

And, continued Father Jerome, “Marine Corps Air Ground Combat Center [MCAGCC] Twenty-nine Palms, in the Mojave Desert, IS the moon as far as many are concerned.

“It’s two hours from the nearest Orthodox parish, and its service school students are forbidden to own or operate motor vehicles,” he adds.

In the absence of assigned Orthodox Christian chaplains, Father Jerome and his wife, Matushka Wendy, provide an Orthodox presence on Sundays at MCRD and one Saturday per month at MCAGCC.

As they arrive at MCRD on Sunday mornings, new recruits are undergoing the rigors of in-processing.

“The sprinting and shouting subsides as recruits are escorted to their selected worship services,” explained Father Jerome.  “Some doubted Orthodox services would even exist.  With freshly-shorn heads and ill-fitting uniforms that are permeated with the odor of moth balls and sweat, bewildered recruits enter the oasis of the small ‘Eastern Orthodox’ Chapel, where their senses are quickly overwhelmed by the pleasing aroma of incense, the sweet sounds of chanting, and the outside-of-time pace of the Divine Liturgy.”

But, as is often the case, members of military chapel communities are continually on the move.

“At MCRD, the complexion of the chapel community changes every 11 weeks as recruits become Marines and depart as new ones arrive,” said Father Jerome.  “The spiritual growth witnessed with each successive Sunday is phenomenal.  Along with the military skills recruits acquire, they renew or become better acquainted with their Orthodox Christian faith.

For some, Father Jerome adds, it is their initial exposure to the faith as their Orthodox battle-buddies invite them to “come and see.”

“For such a brief encounter during Boot Camp, the most appropriate catechesis involves planting seeds that may lead to further enquiry and conversion later in enlistment,” Father Jerome said. 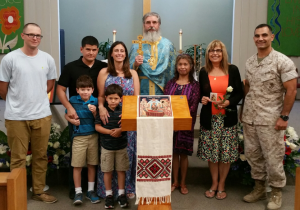 Worshippers gathered for the Feast of Dormition at 29 Palms.

In their ministry at Twenty-nine Palms, Father Jerome and Matushka Wendy occasionally have the rare privilege to continue serving Marines they had met as recruits—some from their current ministry at MCRD and others whom they had met as many as 20 years ago.  Thanks to the teamwork of other Orthodox Chaplains, they find those same people holding senior rank and positions of great responsibility, but also with increased depth and leadership in their Orthodox Christian faith.

Father Jerome, himself a former Marine, retired from the Navy chaplaincy in 2014.  While, as a civilian, he can no longer deploy to provide Orthodox services to those sent in harm’s way—for many years he had served in Afghanistan and numerous other sites.

“That is good reason why the Church – and “the Church” means her members who choose the armed forces as their vocation—needs more priests to become chaplains.”