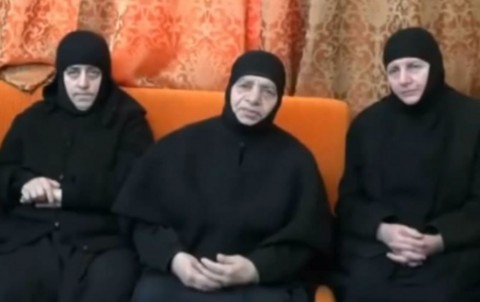 THREE OF THE KIDNAPPED NUNS ARE SHOWN IN THE NEWLY RELEASED VIDEO.
YOUTUBE/LBCINEWS

In a new video of the 12 Christian nuns kidnapped by rebels in Syria (see below), the nuns sit in a room while being questioned by an unseen man, presumably one of the captors. He asks them how they are, if they’ve been mistreated, etc. They respond that they are being treated fine, that they very much look forward to returning to their convent, that they heartily thank the world for its concern, and that they continually pray that God grant peace to all nations.

Their words say one thing, their expressions and demeanor another. Put differently, as female captives of Islamic jihadis, what else could they say but what they were told to say? Even if one of them dared to say the “wrong thing,” their captors naturally would have edited it out. Who knows how many takes it took to get the video—which includes a bizarre clip of the nuns having a snowball fight with their abductors—just right?

But one thing, although minor, speaks volumes about the nature of their captivity: Although these nuns, in photos prior to the kidnapping, generally wear large pectoral crosses, the crosses are not visible in the recent video. No surprise here, considering the “pious” nature of their captors. According to strict Islamic teaching, Christians and other non-Muslims cannot display any signs or expressions of their “polytheism” (shirk in Arabic). Indeed the Conditions of Omar, which mainstream Muslim teaching attributes to the second caliph of the same name, clearly spells this out.

After the seventh century armies of Islam conquered a particular Christian region—possibly and ironically in Syria—Omar stipulated several conditions for Christians to accept, including, “Not to display a cross on them [churches], nor raise our voices during prayer or readings in our churches anywhere near Muslims,” and, “Not to produce a cross or [Christian] book in the markets of the Muslims” (see my book Crucified Again: Exposing Islam’s New War on Christians, pages 24-27, for my new translation of the entire text of the Conditions of Omar).

From here we understand the true plight of the captive nuns. To their captors, not only are the Christian women hostages used for leverage, they also are, ideologically speaking,  “infidel” inferiors—near subhuman who are more akin to animals. Indeed, the same Caliph Omar whom Syria’s jihadis hearken to regarding the ban on Christian crosses also said that the life of non-Muslims is equal to the life of a dog (Western readers should bear in mind that in Arab/Muslim culture, dogs are among the lowest life forms).

As such, the plight of the kidnapped nuns remains precarious—all their scripted words aside. (See here for more on the history of Islamic jihad on Christian nuns.)

Speaking of the removal of the cross, a column in Arabic by one Father George makes an interesting point highlighting the difference between outwardly observant “Salafi” Muslims, presumably like the kidnappers—with their beards and prayer callouses on their heads—and inwardly observant Christians like these nuns:

“Saint Paul says, ‘But God forbid that I should glory, save in the cross of our Lord Jesus Christ, by whom the world is crucified unto me, and I unto the world’ (Galatians 6:14). You removed the cross from the nuns’ breasts. Remove it! We do not rely on the visible. But know that the cross is firmly planted in the hearts of each and every one of those nuns.”