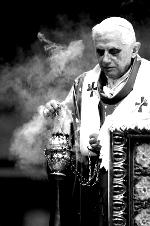 I would like to share with you a brief letter that was published some time ago in an Italian Orthodox parish newsletter. Its author, Archpriest Gregorio Cognetti, is the Dean of the Italian parishes under the Moscow Patriarchate. This letter was generally liked by the Italian Orthodox converts, and also received a high degree of appreciation among some cradle-born Orthodox (it was, for instance, translated into Romanian); I hope it may be prove an interesting reading and a source of inspiration for all of you.

Even though you never asked it directly, I feel from your words that you do not yet understand why I left the Roman Church to become Orthodox.

You were even a member of one of the least latinized Byzantine parishes, you seem to say, why, then?…

I guess I owe you an explanation, since, a long time ago, when we were both members of the Latin church, we shared the same feelings. These same feelings brought both of us to a Byzantine rite parish, and then myself to Orthodoxy. You could not have forgotten the criticisms that we moved to the Romans: the continual insertion of new traditions in place of the old ones, Scholasticism, the legalistic approach to spiritual life, the dogma of papal infallibility. At the same time we both reckoned the legitimacy and correctness of the Orthodox Church. A Uniate parish seemed the optimal solution. I remember what I was saying in that period:

Entering officially into the Orthodox Church seemed to me just a useless formality. I even thought that remaining in communion with the Roman Church might be a positive fact, in view of the goal of a possible reunification of the Churches.

Well, Bill, I was wrong. l believed I knew the Orthodox Faith, but it was just a smattering, and quite shallow for that. Otherwise I would not have failed to know the intrinsic contradiction between feeling Orthodox and not being reckoned as such by the very same Church whose faith I stated I was sharing. Only a non-Orthodox may conceive an absurdity like being Orthodox outside of Orthodoxy. Individual salvation does not only concern the single person, as many Westerners believe, but it must be seen in the wider frame of the whole Church Communion.

Each Orthodox Christian is like a leaf: how could he receive the life-giving sap if he is not connected to the vine? (John 15:5)

Orthodoxy is a way of life, not a rite. The beauty of the rite derives from the inner reality of the Orthodox Faith, and not from a search for forms. The Divine Liturgy is not a more picturesque way of saying Mass: it comes forth from, and strengthens, a theological reality that becomes void and inconsistent if excised from Orthodoxy.

When the spirit of the Orthodox Faith is present, even the most miserable service, done in a shack, with two paper icons placed on a couple of chairs to serve as the iconostasis, and a bunch of faithful out of tune as the choir, is incomparably higher than the services in my former Uniate parish, in the midst of magnificent 12th century Byzantine mosaics, and a well-instructed choir (when there was one).The almost paranoid observance of the ritual forms is the useless attempt to make up for the lack of a true Orthodox ethos. I was deluding myself when I believed I was able to be an Orthodox in the Roman communion.

It was a delusion because it is impossible.

The continual interference of Rome in the ecclesiatical life reminds you in due course who is in command. To pretend to ignore this is self-delusion. I tried to avoid the problem, feigning to be deaf and dumb, and repeating to myself that I belonged to the ideal “undivided Church”. My position was quite sinful. First of all, because the undivided Church still exists: it is the Church that never broke with Her past, and that is always identical to Herself: in other words, the Orthodox Church.

Then, because that feeling of being a member of the Undivided Church, which I considered so Christian and irenical, was instead a grave sin of pride. I was practically putting myself above Patriarchs and Popes. I believed I was one of the few who really understood the Truth, beyond old and sterile polemics.

I felt I had the right to ask the Eucharist both from the Romans and the Orthodox, and I felt unfairly treated when the latter denied it to me. I have a great debt of gratitude towards a priest who, in that time, refused to give me Communion. Instead of softly speaking of canonical impediments, as if the matter were a merely bureaucratic problem, he said me bare-facedly:

If it is true that you consider yourself an Orthodox, why is it that you keep belonging to heresy?

I was deeply shocked by those words, and for a long time I did not return to that Church. But he was right. I had understoodwhat Saints, Fathers, Bishops and Priests had not understood for centuries.

According to me, the schism between East and West was a tragic misunderstanding based merely on political problems and the ponderings of the theologians. And in doing so I indirectly accused many holy people of calculation, superficiality and bigotry. And I was mistaking all of this for Christian charity…

No, Bill, it is impossible to be both Roman Catholic and Orthodox at the same time.

The rite is not all that important. After all, the Latins were Western Rite Orthodox for many centuries. I agree with you that, after the separation, the Romans and the Orthodox have still much in common, but this is not enough to consider both of them part of the same Church. Beyond the well-known doctrinal differences, there is the approach to the Supernatural, the same life of the Church that makes impossible to live the two religious realities at the same time.

We state in the Creed:

“and (I believe) in One, Holy, Catholic and Apostolic Church”.

Until a unity of faith comes, they will be two churches.

The theory (also affirmed by John Paul II) that the Romans and the Orthodox are still the same one Church (despite the schism, and in a mysterious way) sounds well, but it doesn’t hold. It is based only on beautiful words. The differences of faith, on the other hand, do exist, and they are not a mere word-play.

Yes, I know that theological dialogue has been started, and it is even possible (everything is possible to the Lord) that eventually the unity will be reached. But beware! Many good Romans believe that the differences might be resolved by means of a clever statement that, owing to its genericness may sound acceptable by both parties. Having reached an agreement on this statement, both would interpret it according to their understanding, in fact keeping their opinions. Worse still, some propose a unity in diversity, without a formal commitment of faith from any part, but under the universal co-ordination of the Pope of Rome.

Well, all of this is impossible. The Fathers taught us that the the agreement on common faith must be univocal and unequivocal.

Orthodoxy follows the spirit of the Law, rather than the letter. And since it is impossible for the Orthodox Church to introduce new doctrines, it falls on the Romans to abandon a millennium of innovations, and unreservedly return to the faith of the Catholic and Apostolic Church.

This is the only possible platform for an agreement.

History has shown the fallacy of otherwise based unions. And now let me ask you a trivial question: Bill, is the Pope infallible (on his own and not by virtue of Church consensus, as specified in the 1870 dogma) or not? He may not be fallible and infallible at the same time, as it would happen if the two churches were still part of the same Church. One of the two must be wrong.

But Vatican II allowed a great freedom of opinions…

you may answer. Yet this is a sophism. The true Church may not fall in error. If you believe that your Church has erred, or that She is actually erring, you deny that She is the true Church.

I embrace you with unchanged friendship and love in Christ.

(PS. For the record, Father Gregorio Cognetti told me that the recipient of this letter, soon afterwards, converted himself to Orthodoxy — he is now a tonsured reader of the O.C.A. in Florida — and that this letter was a major factor in his conversion)