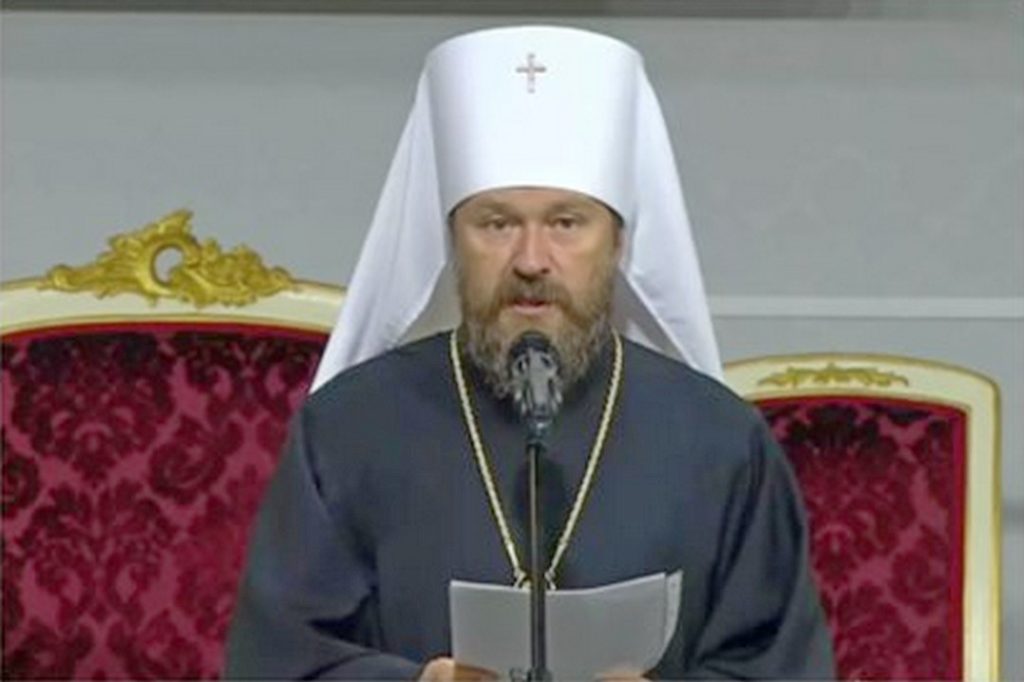 On January 23, 2023, President Zelensky of Ukraine signed Decree № 26/2023 “On the application of personal special economic and other restrictive measures (sanctions).”  https://www.president.gov.ua/documents/262023-45613  Attached to the decree are the names of 22 individuals, all of whom are representatives of the Russian Orthodox Church.  Six individuals are sanctioned for 30 years, while 16 are sanctioned for five years.  See also https://lb.ua/society/2023/01/24/543485_zelenskiy_zaprovadiv_sanktsii_proti.html.  The first person on the list of those sanctioned for 30 years is Metropolitan Hilarion (Alfeyev), presently Metropolitan of Budapest and Hungary.  As is well-known, he was chairman of the Moscow Patriarchate’s Department of External Church Relations (DECR) from 2009 to June 7, 2022.   The current chairman of the DECR, Metropolitan Anthony of Volokolamsk, is also sanctioned, but only for five years as opposed to 30 years for Hilarion.  Sanctions for five years were also imposed on Vladimir Legoyda, the spokesperson for Patriarch Kirill.  Hilarion is subject to 18 enumerated sanctions, while Anthony and Legoyda are subject to 14 sanctions.

It is reported that 16 of the individuals were sanctioned based on the recommendations of the Security Service of Ukraine.  Metropolitan Anthony was on this list of 16 individuals.  Six additional individuals were added by the Cabinet of Ministers.  Metropolitan Hilarion was one of the six.    https://www.pravda.com.ua/news/2023/01/23/7386192/  President Zelensky, in his television briefing on January 23, stated:  “Another NSDC [National Security and Defense Council] decision today concerns our spiritual independence, which we are strengthening and will continue to strengthen.  Sanctions have been imposed against 22 Russian citizens who, under the guise of spirituality, support terror and genocidal policy.”   https://www.president.gov.ua/en/news/yizditi-za-kordon-iz-nederzhavnoyu-metoyu-posadovcyam-bilshe-80577

As was widely reported, Metropolitan Hilarion was subject to a sudden demotion on June 7, 2022.  He was removed from his position as chairman of the DECR and lost his position as a member of the Holy Synod.  He also lost all of the other important positions that he held.  The diocese that he now heads has a total of 11 active priests and five deacons.   http://hungary.orthodoxia.org/papsag/  It was a humiliating demotion.  In my report of June 12, 2022, I discussed the relevant facts relating to the demotion of Metropolitan Hilarion.  See https://www.unifr.ch/orthodoxia/de/dokumentation/anderson/  At the conclusion, I stated:

With respect to Zelensky’s accusation that Hilarion supports “terror and genocidal policy,” one should look at the interview given by Metropolitan Hilarion on January 29, 2022.  https://mospat.ru/ru/news/88917/  Hilarion stated in part:

And in Russia, there are politicians who remind us that our country has never lost in any war, therefore, “whoever comes to us with a sword will die by the sword.”  First, let’s remember at what cost Russia won the wars.  This price is millions of lives.  Secondly, let’s remember that every war brings incalculable disasters to people. We must also remember that the outcome of the war is unpredictable.  Can we assume that Russia won the First World War?  Let’s remember with what enthusiasm Russia entered it, and what patriotic feelings accompanied Russia’s entry into this war.  Could anyone then imagine that in three years, Russia would collapse?.. For all these reasons, I am deeply convinced that war is not a method of solving the accumulated political problems.

Metropolitan Hilarion has now been in Budapest for almost eight months.  He communicates with the public frequently through his Telegram channel. https://t.me/s/MetropolitanHilarion   One can see by reviewing all of his entries since his arrival in Budapest (as I have) that he has addressed only strictly religious issues and has not discussed Ukraine at all.  Here, in my opinion, we have a prelate who has been exiled because he did not vigorously support the policies of the Putin administration with respect to Ukraine.  Yet now, he has been subject to sanctions, and in fact, the highest degree of sanctions, because he allegedly supports a policy of terror and genocide.  I can only shake my head in disbelief.  One simply wonders who can be advising Zelensky in religious matters.

With respect to religious matters in Ukraine, the following are two analyses relating to draft law No. 8371 now pending before the Ukraine Rada.  https://spzh.news/en/zashhita-very/71469-shmyhal-bill-banning-the-uoc-in-4-moves ;  https://lb.ua/news/2023/01/23/543372_yak_derzhava_zaboronyatime_upts_mp.html  In my last report, I provided my own analysis.  https://ilsismografo.blogspot.com/2023/01/ucraina-problematic-new-draft-law-on.html   Reading the other analyses further confirms my belief that the ambiguities in the draft law raise major problems, such a need for definitions for the terms “affiliated” and “centers of influence.”

Lastly, a delegation of the All-Ukrainian Council of Churches and Religious Organizations is now visiting the Vatican.  https://www.pomisna.info/uk/vsi-novyny/vidbulasya-zustrich-delegatsiyi-vrtsiro-z-kerivnykamy-dikasterij-vatykanu/; https://risu.ua/vizit-vrciro-do-vatikanu-ye-nagodoyu-donesti-do-svyatishogo-otcya-franciska-golos-ukrayinskogo-narodu—glava-ugkc_n136120   From the photographs of the visit, I can identify as part of the delegation Metropolitan Epifany (head of the OCU), Major Archbishop Sviatoslav Shevchuk (head of the UGCC), and Archpriest Mykolay Danylevych (deputy head of the DECR of the UOC).  It is reported that the delegation will be meeting with Pope Francis.