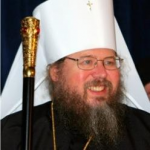 In a letter addressed to the members of the Holy Synod of Bishops dated Friday, July 6, 2012, His Beatitude, Metropolitan Jonah tendered his resignation as Primate of the Orthodox Church in America.His Beatitude composed and signed the letter at his residence in Washington, DC, in the presence of Archpriest John Jillions, OCA Chancellor.

On Saturday, July 7, the letter was presented to the Holy Synod in the course of a conference call in which all of the hierarchs participated, except His Eminence, Archbishop Alejo of Mexico City.

The text of His Beatitude’s letter reads as follows.

“To the Holy Synod of the Orthodox Church in America,

“As per your unanimous request, as conveyed to me by Chancellor Fr. John Jillions, I hereby tender my resignation as Primate of the Orthodox Church in America, and humbly request another Episcopal assignment.

“I had come to the realization long ago that that I have neither the personality nor the temperament for the position of Primate, a position I never sought nor desired.

“It is my hope that due consideration will be made for my financial situation, both in any interim and in consideration for any future position. I am the main financial support for both my parents and my sister, beyond my own needs.

“I will appreciate your consideration in this, and beg forgiveness for however I have offended you, and for whatever difficulties have arisen from my own inadequacies and mistakes in judgment.

“Asking your prayers, I remain faithfully yours,
“Metropolitan Jonah, Archbishop of Washington”

The hierarchs again will meet via conference call on Monday, July 9, after which additional information will be made available.

A PDF of His Beatitude’s letter is also available.

Metropolitan Jonah of the Orthodox Church in America Suddenly Resigns His Office: Why? – Catholic Online