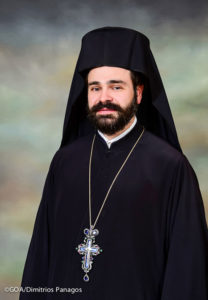 Metropolitan Nathanael of Chicago, enthroned just last month, impressed us with his enthronement address and appears to be quite suited to shepherd a Metropolis that was led for decades by a questionable prelate and his auxiliary bishop over the last few years, who has now been cast aside.

Based on other reports as well, Nathanael appears to be a serious individual, a good orator (who has an excellent command of both languages), exceptionally trained, and above all, down to earth.

From his interviews, we gather that he has an understanding of today’s social reality, and at a time when congregations are shrinking, the new Metropolitan believes that our Church must reach out to the faithful instead of waiting for the faithful to come to it. On the day of his enthronement, when students in Chicago and all across the nation were holding angry demonstrations in the streets, Nathanael pointed out that the area faithful must also take to the streets together with the protesting students to speak out against unrestricted weapons sales.

Greek-Americans in the Metropolis of Chicago hope that Nathanael will restore order to the chaos that has prevailed up until now and decisively handle Elder Ephraim’s growing influence—a problem that the haggard Archbdiocese of America refuses to address.