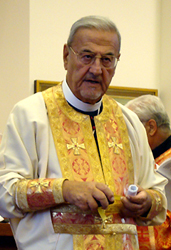 His Eminence Philip (Saliba), Archbishop of New York and Metropolitan of All North America, head of the Antiochian Orthodox Christian Archdiocese of North America, sent a message to the Primate of the Russian Orthodox Church, which reads, in particular: “We monitor with gratitude your tireless efforts in support of the Christians, and all the God-fearing people of Syria.”

His Eminence Metropolitan Philip expresses his conviction that the forces responsible for stirring up the conflict in the country “have ulterior motives in mind, not the least of which is to expunge the area of Christians who have been living in that land peacefully with Muslims for many years under the secular government…” .

The hierarch of the Church of Antioch thanked the Russian Church for carrying out the fund-raising campaign and sending the money collected “to help the needy, homeless and downtrodden people of Syria” who have been suffering from “the uncivil war that continues to rage.”

“Throughout history, Russia has protected the Orthodox of the Middle East in times of need and it seems history is repeating itself once again,” the letter reads. His Eminence Metropolitan Philip expressed his gratitude to His Holiness Patriarch Kirill of Moscow and All Russia for his support in this difficult time and asked him “to remember the victims of this barbarism” in his prayers. [subscribe2]