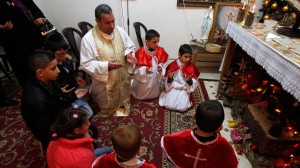 Father Raymond Moussalli, a Syrian priest, prays with Iraqi children for peace in Iraq and Syria during a Mass at a Chaldean Catholic church in Amman, Jordan, last December. CNS photo from Reuters

In Egypt, Syria, Iraq and elsewhere, survival is greatest gift they can hope for this Christmas

In years past, Christmas was a time of festive decorations, warm family gatherings and traditional worship services, but now, the only hope for many Christians in the Middle East this season is that they may be remembered in the Christmas prayers of Christians around the world; that they pray for peace and an end to the violence that has racked the region for several years.

In places such as Egypt, Syria and Iraq, many churches have been destroyed. In Syria, priests and bishops have been kidnapped and killed. Indeed, the death toll in Syria’s civil war has risen to almost 126,000, more than a third of them civilians, including some 6,600 children, according to the England-based Syrian Observatory for Human Rights. Some estimates say as many as 4 million people have been displaced internally by the fighting and 2 million have fled.

Once seen as an asylum for refugees from Iraq, Syria is itself in turmoil and Iraqi refugees — of whom 44 percent were Christian, according to the British humanitarian aid group Iraqi Christians in Need — are once again fleeing from sectarian and political upheaval.

In Egypt, scenes of young Muslims and Christians protecting each other at their prayers as they joined together to demand the ouster of Egyptian President Hosni Mubarak raised hopes for a peaceful, united future two years ago, but those hopes soon gave way to Christian fears of the rise of the Muslim Brotherhood. The influence of Islamists on the new constitution under Mohammed Morsi increased those fears. When Morsi was himself ousted in July by the Egyptian armed forces and the constitution was suspended, Christians once again briefly saw a ray of hope. The army’s crackdown on protests by pro-Morsi supporters led to violent attacks on Christians and Christian churches and other institutions and businesses, once again doing much to squash hope for a peaceful future.

As sporadic rioting continues, Christians and Christian churches continue to be targeted. Indeed, although Egypt’s Coptic Christians are about 10 percent of Egypt’s population — making them the largest Christian minority in the Middle East — they continue to face an uncertain future.

According to Aid to the Church in Need, a pontifical foundation of the Catholic Church that supports Catholic faithful and other Christians in places of persecution and oppression, religious persecution has played a crucial part in the conflict in Syria, with Christians suffering considerably along with other faith communities. The situation in Syria has dire implications for the prospects for the future of Christianity in Syria, which has “clearly entered one of its most perilous periods,” said the foundation.

“The situation is worsening,” Jerusalem Syriac Catholic Patriarchal Vicar Bishop Boutros Melki told Our Sunday Visitor. “Especially in Aleppo they are really cut off from any contact with any one outside.”

The city used to have a large Christian population, he said, but now those who could have left. The mostly Christian historical village of Maaloula was attacked last month, he said, and many people were killed or kidnapped, including a group of Greek Orthodox nuns who were recently shown in a video wearing their black robes, in apparent good health, denying they had been kidnapped although a Syrian newspaper claimed they were being held by a rebel group demanding the release of thousands of female detainees held by the government. The nuns said they would be “released” in two days.

“We really ask that people pray for the Syrians,” Bishop Melki told OSV. “There are more victims and more refugees. We can’t imagine that there will be a Christmas. What they need for Christmas is prayers from people all around the world, and other instances of joint prayer as Pope Francis did last September. He still mentions Syria and asks for prayers and peace.”

In an interview with the Michigan-based Chaldean News newspaper, Mar Louis Raphael I Sako, Chaldean Catholic Patriarch of Babylon, noted that 10 years have passed since the United States sent troops against former Iraqi leader Saddam Hussein, but the violence and mayhem in his country have continued. Many Christians have sold their homes and properties, leaving Iraq in search of a better future for their children, he said.

As Christians celebrate the coming of the Prince of Peace, for Christians of Iraq and the Middle East the only way to emerge from the situation of violence is through dialogue, Patriarch Sako said.

“It is necessary to spread feelings of brotherhood and solidarity,” he said. “This is the desire of the majority of Iraqis, Christians and moderate Muslims. All Christians and Muslims believe in one God, the Creator, and the Father ‘merciful.’ So why don’t we all agree according to this faith?”

Unlike areas of the West Bank with larger Christian populations such as Bethlehem and Ramallah, Christians in Gaza, where the Islamic Hamas movement has governed for seven years, will celebrate the holiday in a more subdued tone, said Bishop William Shomali, Jerusalem Patriarchal Vicar.

As all Gazans, the community is suffering from a difficult economic situation with electrical shortages and lack of supplies because of embargoes from both the Israelis and the Egyptians.

At less than 1 percent of the population, Christians are a tiny minority there, he noted, and though they are free to pray in their church — there are Greek Orthodox, Roman Catholic and Baptist communities — “they cannot show their faith outside,” he said.

But Christians find support in one another, and during Christmas they come together to celebrate the holiday with a community dinner, which last year some 400 people attended, he said. Despite the difficulties, Bishop Shomali said their situation cannot be compared to what is happening in Syria.

“There the situation is a real tragedy,” he said.