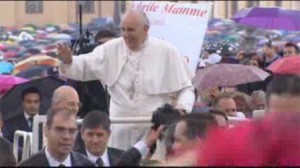 January 5, 2014 (Associated Press – VATICAN CITY) — Pope Francis says his upcoming trip to the Holy Land aims to boost relations with Orthodox Christians. But the three-day visit in May also underscores Francis’ close ties to the Jewish community, his outreach to Muslims and the Vatican’s longstanding call for peace between Israel and the Palestinians.

The announcement was made Sunday just as U.S. Secretary of State John Kerry wrapped up three days of talks with Israeli and Palestinian leaders in a new U.S. bid for peace.

Francis told thousands gathered in the rain for his weekly Sunday blessing that he would visit Amman, Bethlehem and Jerusalem on May 24-26. It is the only papal trip confirmed so far for 2014 and the second foreign trip of Francis’ pontificate, following his 2013 visit to Brazil for World Youth Day.

Francis, an Argentine Jesuit, will be the fourth pope to visit the Holy Land after Paul VI’s landmark visit in 1964.
In his Christmas address, Francis singled out the Holy Land for prayers, saying “Bless the land where you chose to come into the world, and grant a favorable outcome to the peace talks between Israelis and Palestinians.”

“We are hoping for a new glimmer of light from this visit in relations with the Orthodox, with Muslims and Jews,” Monsignor William Shomali, auxiliary bishop in Jerusalem, told Vatican Radio on Sunday.

The Palestinian news agency Wafa said President Mahmoud Abbas hoped it would “contribute to alleviate the suffering of the Palestinian people who aspire for freedom, justice and independence.”

In Jerusalem, Israeli Foreign Ministry Yigal Palmor said Francis was “will be greeted as warmly as his predecessors were.”

Jordan’s Royal Palace said the Amman leg of Francis’ visit – on May 24 – would mark a “significant milestone for brotherhood and forgiveness between Muslims and Christians and consolidates the message of peace.”

Francis said his prime aim was to commemorate the 50th anniversary of the historic meeting in Jerusalem between Pope Paul VI and the then-spiritual leader of the world’s Orthodox Christians, Ecumenical Patriarch Atengora.

Catholics and Orthodox have been divided since the Great Schism of 1054, precipitated largely by disagreements over the primacy of the pope.

Francis will be joined in Jerusalem by the current ecumenical patriarch, Bartholomew, who became the first ecumenical leader to attend a papal installation since the schism when he traveled to Rome for Francis’ inaugural Mass in March. They will celebrate Mass together at the Church of the Holy Sepulchre, where the faithful believe Jesus was crucified and buried.

Francis’ full itinerary hasn’t been released, but Rabbi Skorka said he hopes the pope will stop at the Western Wall, the holiest site where Jews can pray in Jerusalem.

The Catholic Church in the Holy Land said the visit was aimed “mainly at spreading and promoting love, cooperation and peace among all inhabitants.”

After decades of reluctance by the Vatican to recognize the Jewish state, the Polish-born John Paul II forged formal relations in 1993, following it up with an official visit to Israel in 2000 that included stops at the Holocaust memorial Yad Vashem and at the Western Wall, where he famously left a handwritten plea asking forgiveness for Christian persecution.

The German-born Pope Benedict XVI followed up nine years later with his own visit.

(Copyright ©2014 by The Associated Press. All Rights Reserved.)