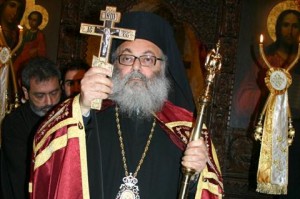 The appointment came during a closed meeting of 18 Bishops at Balamand monastery, some 85 kilometers north of Beirut.

Speaking following his appointment, Yaziji said he will do his best to keep on serving the church and asked the lord to give him strength in doing so.

Hazim, who was born in the Syrian town of Maharda in Hama Province, passed away Dec. 5 at the age of 92 in a Beirut hospital, a day after suffering a stroke.

Yaziji, 57, hails from Syria’s Lattakia, where he pursued his studies in civil engineering.

Throughout his studies, Yaziji had a pivotal role in establishing several spiritual programs and training choirs in chanting Byzantine music.

Yaziji was appointed as deacon in 1979 and priest in 1983. In 1981, he took up teaching liturgy at St. John Damascus Faculty of Theology at Balamand University where he had previously studied, assuming the position of dean of the faculty from 1988-1991 and 2001-2005.

In 2008, he was elected as the Greek Orthodox Metropolitan of western and central Europe.