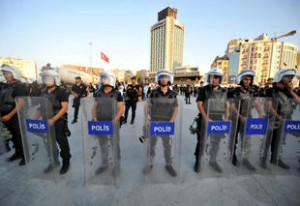 An exchange between the Assyrian Orthodox Church and the police directorate raised hopes of ending what some describe as discriminatory practices.

By Menekse Tokyay for SES Türkiye in Istanbul

A recent exchange between the police directorate-general and a leader in the Assyrian Orthodox Church spurred new hope that public sector institutions will openly accept non-Muslims.

Although there is no official ruling or policy that prevents non-Muslims from public service, there have been very few non-Muslim police, army officers or judges. The non-Muslim population is estimated at about 100,000, including 60,000 Armenians, 23,000 Jews, and 15,000 Syriacs. Turkey’s population is about 74 million.

Yusuf Cetin, the Istanbul metropolitan of the Assyrian Orthodox Church, raised the issue in a recent interview with the daily Milliyet.

“Why can’t people of different faiths be assigned to the posts within the civil services, military and the police?” Cetin asked.

The police directorate-general responded on Twitter, saying “all citizens of the Republic of Turkey may join police forces regardless of religion, race and sect.”

“We do invite our Syriac citizens, too, to attend the exams of the police department and become police officers,” the statement continued.

Cem Sofuoglu, an attorney representing the Greek Orthodox Patriarchate, said the police directorate’s statement was encouraging and inspired hope that a silent prejudice against minorities might one day be broken.

“I expect that they will hire some non-Muslim staff as an example for other minorities to join them. For years, there was a threat perception toward non-Muslims, who were seen as internal foes who would divide the country. However, this appeal is a sign that this perception is changing for the benefit of normalisation and internal peace,” Sofuoglu told SES Türkiye.

Sofuoglu said the move should be accompanied by comprehensive training among police forces to eliminate prejudices against non-Muslims.

“Otherwise, police forces can act with nationalistic reflexes and may cast their new non-Muslim colleagues aside because these people have been trained with nationalistic paradigms which have an impact over their perception and behaviour toward other people,” he added.

Non-Muslim representatives and human rights experts are suspicious of the public appeal, saying there is a need for far-reaching steps to remove established discriminatory attitudes.

They seek a change in the text of the police admission oath, which emphasises the adherence to Turkish nationalism, and also seek training for police to avoid using words or phrases that are offensive to non-Muslims.

Aras Ergunes, an Armenian citizen of Turkey and a social sciences scholar at Kocaeli University, questioned whether the police department’s appeal is genuine. He added that the police forces are known for their nationalistic character, noting that police took photos with Ogun Samast after the then-17-year-old murdered Armenian journalist Hrant Dink in 2007.

“Just as limiting mother tongue education to private schools that cost tens of thousands of TL crassly tells poor people in the Kurdish region to take the opportunity if they can, the police directorate’s invitation to non-Muslims condones an institution that murdered an intellectual who could have been the voice of minority populations, and took a souvenir photo with the killer,” Ergunes said.

“There is not a legal barrier for non-Muslims to become police or military officers. In fact, you cannot depict such restrictions in the legal texts, otherwise the state would have to confess its own discriminatory practices,” he added.

Ergunes said as long as state authorities see non-Muslims as a threat, it is illogical to expect them to have non-Muslims on the police force, which is responsible for protecting the state against threats.

“I was performing my military duty in October 1980 in Ankara as a reserve officer. There was a need for translators knowing English and Arabic. I know both of these languages very well, in written and in spoken,” Konutgan told SES Türkiye.

He filled out the application form, and one day before the exam, he was eliminated from the candidacy list because the staff told him that only Muslims and Turkish people could apply to that post.

Konutgan said discriminatory practices against non-Muslims in Turkey cannot be eradicated overnight with just a Twitter appeal, and there is a need for a change in mentality, ranging from the school curricula to vocational training, in order to have a sustainable peace between Muslims and non-Muslims.