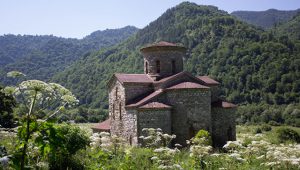 Every year hundreds of tourists visit the canyon of the Bolshoy Zelenchuk River in order to admire the magnificent tenth century Christian temples built on the site of the ancient settlement of Nizhny Arkhyz. Most scientists identify this ancient settlement with Maghas, or Maas – the capital of the large kingdom of Alania which existed in the Middle Ages. The city grew and prospered because strategic routes of the Silk Road passed through it. Alania flourished the most in the mid-tenth century when the kingdom’s nobility embraced Christianity. It was then that over twenty churches were erected in the Bolshoy Zelenchuk valley.

The Mongol-Tartars who had invaded the plains of North Caucasia (also called Ciscaucasia) by the mid-thirteenth century struck Alania, this once prosperous state. Those Alans (or Alani) who managed to escape moved to live in the mountains where they gradually mixed with the local Caucasian population which was predominantly Muslim. Maghas became deserted and subsequently disappeared from the face of the earth.

In 1887 a certain Hieromonk Seraphim from Mt. Athos appealed to the Holy Synod of the Russian Orthodox Church, reporting that three ancient churches which had been founded by the first Christians of the North Caucasus were discovered in the valley of the Zelenchuk River. He reported that the local inhabitants, Muslims, kept cattle inside these churches and “desecrated the ancient shrines in various ways.” The monk asked the Synod to allow him to restore the churches, to establish a monastery there, and to introduce in it the monastic rule of Mt. Athos.

Upon receiving the blessing of the Holy Synod, Hieromonk Seraphim together with ten fellow-monks founded the Monastery of St. Alexander Nevsky in the river valley. Through their efforts the ancient temples were restored. In addition, the monks discovered traces of several chapels in various sites of the river valley and realized that once a large stone city had existed on that place.

In the Soviet era the monastery was closed and the monks were repressed. However, some monks managed to escape and settled in the mountains, and today travelers still can find their abandoned secret cells.

Today the Russian Orthodox Church has the legal right to acquire these temples back. It would seem that there are no more obstacles to reviving monastic life on the bank of the Bolshoy Zelenchuk and there are no more threats to the ancient churches. However, the problem is that the whole territory of the former monastery now belongs to the Karachay-Cherkessia Historical and Cultural and Natural Museum-Reserve. It is generally known that the relations between the Church and administrations of Russian museums are quite difficult: the museum community tends to take responsibility for the protection of monuments of Orthodox culture fearing that the Church will not be able to cope with this task and they will be lost forever. But here, high in the mountains, the picture is quite different.

At the border of the Arkhyz ancient settlement stands a guardhouse, tourist coaches constantly running past it. Whether people travel to the territory of Arkhyz on foot or in their own cars the guard always tries to charge an entrance fee, which provokes the indignation of locals and Orthodox pilgrims who are unwilling to pay for the opportunity to pray. In the end the guard makes a concession for the locals, not charging them for entry.

The road weaves along bushes for about a mile and a traveler at last can see the first church – in honor of the Holy Prophet Elias – the oldest church on the territory of the Russian Federation still in use. The temple is tiny with several brethren’s buildings around it. It was originally united with one of them by a passageway. Now the passageway is destroyed and an entrance door to the church was made on the other side, so the chancel is to the left of the entrance.

The state of the buildings is shocking: the brethren’s buildings look as if they were bombed yesterday – with broken windows, warped doors, and shabby walls. The buildings are in a state of emergency. The other two churches are in bad condition as well: it is dangerous to be inside the Holy Trinity Church where there is no interior finish any more and bricks can fall on tourists’ heads at any moment; the situation inside St. George’s Church is slightly better, but hundreds of swallows dwell on its walls and ceiling and nobody cleans its floor, so it is dangerous to walk there too.

At the same time, all the churches and brethren’s buildings have signs indicating that they are objects of the Russian Federation’s cultural heritage and are under the protection of the state.

According to a pilgrim who frequently comes here for services, the Church concluded a lease agreement with the museum-reserve and now rents the St. Elias Church and holds occasional services in the two other churches, but has been unable to get these churches back or restore them yet.

“The buildings are crumbling all the time, the ceilings may fall on someone’s head in the near future. The faithful are allowed to gather in one building which we use as a refectory, but that does not solve our problem. The building needs good repair and maintenance. It is in a critical condition. When there was a monastery here, it had drainage: water from the mountains was drained aside so as to prevent underground waters from approaching the buildings’ foundations. Now there is no drainage system here,” the pilgrim explained.

In his view, it is unlikely that the buildings will be returned to the Church before long because the museum-reserve recently decided to make it an ethno-village for tourists. The majority of local inhabitants are practicing Muslims, though they identify themselves as the descendants of Alans – an old Christian Iranian-speaking people who once lived in this region.

Today it looks unusual that “the proud offspring of Alans” should come to the site of their ancient capital on major Muslim festivals and slaughter their sacrificial sheep right near Orthodox churches. And on weekends Orthodox believers who gather to pray at the church often find themselves in the thick of festive events, when it becomes next to impossible to hold any services. A stage with speakers is installed right in front of St. Elias Church, and the whole canyon resounds with the noise of merry folk songs, while all visitors are offered tea, honey, and national costumes. Of course, all of this is well-organized and attracts many tourists, but hardly appropriate to do on the territory of an Orthodox monastery.

“The believers do not want to leave this place. And it is a pity that nothing is being restored here, so all the structures are falling into disrepair. And if the brethren’s buildings go to ruin, then the very traces of the Russian monastic presence on this spot will disappear,” the faithful complain. They hope that cooperation between the Russian Orthodox Church and the museum-reserve can be achieved, as both the clergy and laity seek to preserve these churches and monastic buildings and not to do them any harm.

“Can we really damage these churches?! Quite the contrary, our aim is to preserve them! We hope the situation will change at some point. After all, Orthodox life has not died out here,” the pilgrim said.

Upon failing to get full access to the Zelenchuk churches, the local Orthodox community built a new church in the old style on the opposite side of the river. It stands at the foot of the mountain on which a famous image of Christ is depicted. But the locals got their way again: they opened various souvenir shops and dozens of cafes around the church and guests can try hichins, lamian, and mutton shish kebabs there. It is always noisy in the square in front of the church with crowds of tourists bustling about. And, as a supplement to this contrast of cultures, a huge billboard advertisement for the Vera (“Faith”) radio towers over a café…

And though Muslims and Christians peacefully co-exist and cooperate throughout Russia, one gets the impression that the Orthodox Christian minority in this remote corner of Karachay-Cherkessia is being gradually forced out. “We have the desire to restore the heritage of this site. But sometimes we feel that our presence here is being reduced to naught,” believers state with sorrow.