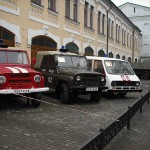 KIEV — The apocalyptic visions begin just inside the doors of the Ukrainian National Chernobyl Museum and many of them lead into the Book of Revelation.

The final pages of Christian scripture are full of angels, trumpets, flames, thunder, lightning, earthquakes and catastrophes that shake heaven and earth.

When Ukrainians translate “wormwood” into their own language it becomes “chernobyl.” It’s easy to connect the two when discussing the legacy of pain that followed the 1986 disaster at the Chernobyl Power Station north of Kiev, when explosions and fires at the reactor core released a plume of radioactive debris that drifted over Russia and into Europe.

”The catastrophe at Chernobyl station took its victims before their time,” said Archpriest Andrei Tkachev of St. Agapit of Pechersk Orthodox Church in Kiev. “Man is supposed to meet death in his own time, when he has a chance to prepare to meet God. That kind of death is a gift from God — a good death. ”That is not what happened for many of the victims of Chernobyl.”

The museum opened on April 26, 1992, the sixth anniversary of the disaster and soon after the Soviet Union’s collapse. The exhibits include 7,000 artifacts from the 76 towns and villages — with 76 churches, in this historically Orthodox culture — that were razed in the radiation-tainted resettlement zone.

The door into a large chamber dedicated to the families and children of Chernobyl leads to the church iconostasis, with a radiation suit hanging in place of the Archangel Michael and barbed wire and a contamination sign blocking the way to the altar. High overhead is an icon of St. Nicholas, the patron saint of endangered children.

The altar is gone, replaced by a boat — to carry souls over the waters of death — full of children’s toys. Under the boat, the blackness is full of the icons of saints.

The Chernobyl disaster was especially poignant, said Tkachev, because it struck a region that for many symbolized the innocence and safety of the past.

”The people here were simple people. They didn’t have writers and journalists to tell their stories,” he said. “This is an attempt to tell their story, using what they left behind when they were forced to flee the homes, their schools and their churches. …

”Modern life separates a man who has deep faith from a man who has little. In these villages, life and faith were simply combined and you can see that here.”

In one of the starkest images — over a map of the stricken region — the melting reactor literally shatters a famous icon of the Virgin Mary holding the Christ child, while an apocalyptic storm swirls around her.

”We are tempted to think that fire and water and all the elements of nature are at our command, but that is not true,” said Tkachev, outside the final exhibit hall. “We can become victims. … The more technologies are in our lives, the more danger there is that we become their servants, even their slaves.”

The archpriest stroked his beard, thinking of another way of stating the ultimate message of this sobering tribute to lessons learned at Chernobyl.

If a man builds a bicycle and it breaks while he is riding it, then he will be hurt when he falls, said Tkachev. If he builds an airplane and it breaks, he will almost certainly die when it crashes.

”Now, if we build a nuclear reactor in our backyard and it breaks, then the catastrophe will kill many and it may last into future generations,” he said. “What this teaches us is that we must fear God and try to be humble about the things that we build with our own hands.”