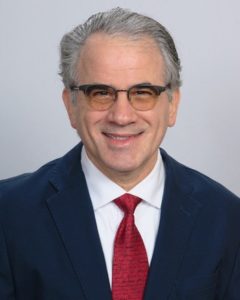 [West Palm Beach, FL, August 18, 2020] Thirty-one years ago, the Orthodox Christian Laity (OCL) was founded by a far-seeing group of Orthodox Christian lay leaders, seeking to restore the historic role of the laity in Orthodox church governance, and focusing on transparency, accountability, and American Orthodox unity. Through these opening decades, OCL has led important discussions about the future of the Church in America, and through its public forums, advocacy, publishing, and altruistic leadership, has helped promote the cause of a vibrant American Orthodox Church for future generations.

In this history of service, OCL has been almost exclusively a volunteer organization, drawing upon the talents and passions of many of the most accomplished Orthodox citizens of the United States, as well as like-minded members of the clergy and hierarchy. Today, several hierarchs in America serve on OCL’s Advisory Council. But for most of its history, OCL has had a professional Executive Director at its helm, managing its diverse operations.

This year, after 20 years of enlightened leadership as Executive Director, George Matsoukas has stepped down. After thoughtful consideration, the board of directors of OCL unanimously approved the appointment of David Oancea as its Executive Director beginning September 1, 2020. The transition began in mid-July.

David Oancea is eminently qualified to undertake this position and its responsibilities, as he has served as OCL’s webmaster for the past 17 years.  His commitment to OCL is proven, and he is passionate about its mission of working toward and supporting all efforts in the creation of an administratively-unified Orthodox Christian Church in America, that is transparent and accountable to all members of the Orthodox community. He is an advocate of lay inclusion and participation in all aspects of church governance.  He believes deeply in Orthodox Christian unity, and that such unity is essential to Orthodoxy’s witness to Christ in this part of the world. He is a worthy successor to lead the organization to face the challenges that its mission presents.

Argo Pyle, President of Orthodox Christian Laity, said: “David brings a lifetime of education and work experiences to this position. He represents a new generation with excellent human relations and technical communication skills. We are delighted that David has accepted the challenge.

“He needs the support and input from all Orthodox Christians in America, and beyond, to achieve OCL’s vision and goals. Please share your ideas, comments and stories on OCL’s Facebook page (https://www.facebook.com/OrthodoxChristianLaity/) or via email ([email protected]). Consider offering your time and talents by joining the OCL movement in any way you can. We look forward to welcoming the next generation of board members and volunteers! So many Pan-Orthodox projects are already happening in local communities. Let us know how Orthodox Christians from various jurisdictions in your area are working together in community service projects, so that we may highlight this living-out of the gospel through grassroots Orthodox unity.”

George Matsoukas, retiring Executive Director of OCL, issued the following statement: “David is the ideal successor. He brings renewed energy and a great vision to the position. He has a strong foundation to stand on, and he is the individual who will bring OCL to new levels with God’s help, the cooperation of clergy and laity, and your involvement and support.  I have so enjoyed my twenty-year tenure as director, and I am excited about what the future, under David’s stewardship, will bring.”

David Oancea hails from Canton, Ohio, where he grew up in a parish of the Romanian Diocese of the Orthodox Church in America. After receiving a Bachelor of Arts degree in Religious Studies from The College of Wooster, Wooster, OH, he received a Master of Divinity degree from St. Vladimir’s Orthodox Theological Seminary, Yonkers, NY. While at St. Vladimir’s, he also participated in the student exchange program for one semester at Holy Cross Greek Orthodox School of Theology, Brookline, MA. Since 1988, David has worked in various capacities at The Romanian Orthodox Episcopate of America, Jackson, MI, and most recently as Chancellor. For the past 17 years, he has also worked for Orthodox Christian Laity as website content administrator and webmaster.