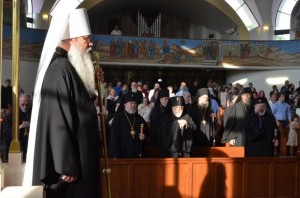 ATLANTA, GA [OCA]  Hierarchs, clergy and faithful from across the US, Canada and Mexico began arriving in Atlanta over the weekend of July 18-19, 2015 for the 18th All-American Council of the Orthodox Church in America.  They joined hundreds of participants in the Fellowship of Orthodox Christians of America’s 89th national convention, which was already underway.  The convention is the first to be held in conjunction with an AAC.His Beatitude, Metropolitan Tikhon arrived on Saturday, July 18, at the Atlanta Hilton. where he was given a warm welcome by members of the Holy Synod of Bishops, AAC and FOCA convention participants, members of the AAC local planning committee and faithful representing area parishes.

Sunday morning opened with the Hierarchical Divine Liturgy at the Atlanta Hilton, concelebrated by Metropolitan Tikhon and members of the Holy Synod.  Faithful from parishes throughout the area joined AAC and FOCA participants for the Liturgy.  The choir of Saint Symeon Church, Birmingham, AL sang the liturgical responses.  [See photo gallery of the Divine Liturgy on the OCA web site and Facebook page.]

AAC delegate and observer registration will continue on Sunday and Monday.  Prior to the AAC’s official opening on Monday evening, July 20, several OCA dioceses will hold their annual assemblies at the AAC site.

The AAC will officially open with the celebration of a Service of Prayer at 7:30 p.m. on Monday, after which Metropolitan Tikhon will call the Council to order.  Highlights of the plenary session include.

Daily updates, galleries and videos will be posted on the OCA web site,Facebook page and 18th AAC Facebook page throughout the week, together with video coverage by Ancient Faith Media.