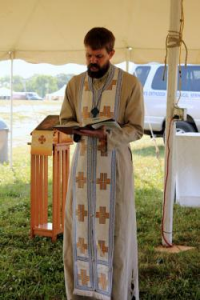 Members of the Saint Tikhon’s Seminary community, along with seminary alumni and dedicated volunteers, provided an Orthodox Christian presence at the annual Cornerstone Christian Music Festival here in early July 2012.

In light of the deeply rewarding missionary efforts of last year’s endeavor, it was decided that once again Saint Tikhon’s would play a part in the outreach at the festival In early March, the outreach team began preparing for this year’s event by making the necessary financial arrangements to ensure that pamphlets, books, lodging accommodations, fuel, as well as Orthodox t-shirts and books, would be available for the team to provide an effective and visible presence.

This year the outreach team attempted to build on the foundation that was laid last year by not only holding Orthodox prayer services, but also offering several talks on various topics immediately following the evening prayer service.  Statistically speaking, both the services and the talks were very well attended, each having as many as 55 people in attendance and curious about the Orthodox Faith.

“It was an amazing experience!” said Father Nicholas.  “It is remarkable to be surrounded by so many young people hungry for the Orthodox Faith and eager to ask real and heartfelt questions that they have been unable to find answers for elsewhere.”

This year, in preparation for the event, a special section of the seminary web site was also developed to provide necessary information for those interested in understanding more about the Orthodox Faith.  A special on-line adaptation of the book, “These Truths We Hold,” was made available and linked with the newly registered domain name www.churchstillstands.org.  This web site address was then placed on each and every flyer the outreach team handed out at the concert event.  This has already begun to generate hundreds of additional visits to the seminary web site.

One thing that was immediately clear was that, due to the ever-increasing financial uncertainty in our Orthodox communities, many of the sponsorship opportunities that were made available to last year’s team would not be available for the 2012 event.  Unwilling to allow this year’s festival—which incidentally may be the last Cornerstone Festival—to go without Orthodox representation, it was then decided that the Saint Tikhon’s community would begin raising the necessary funds to make this year’s event possible.

To that end, the seminary community would like to thank the individuals and groups of individuals for their sponsorship of this year’s outreach team.  It is because of your generous giving that this year’s team was able to speak to hundreds of individuals about the fullness of the Orthodox faith, provide them with materials to review after they left the festival, and exchange contact information to provide necessary follow-up over the course of the next year.  Many thanks to Archpriest Alexander Atty, Dean of Saint Tikhon’s Seminary; Archpriest Dennis Swencki, Chief Financial Officer of Saint Tikhon’s Seminary; the seminary Board of Trustees; Father Sergius, Abbot of Saint Tikhon’s Monastery, for his generous donations of books and supplies; His Eminence, Archbishop Tikhon and the Diocese of Eastern Pennsylvania; His Grace, Bishop Mathias and the Diocese of the Midwest; His Grace, Bishop Michael and the Diocese of New York and New Jersey; Priest John Parker and the Department of Evangelization of the Orthodox Church in America; Ron Moore and “Ancient Church Arts;” Bobby Maddox and Conciliar Press; John Valadez and “Death to the World;” and the families and parish communities of each of the team members.

Unfortunately, it was announced in late spring that this year may mark the last time the Cornerstone Festival might be held.  Financial concerns and changing demographics were reported by Cornerstone organizers as the reason for ending this 29-year-old festival.  As recently as two weeks agom several concerned groups had entered into a discussion with JPUSA, the group responsible for the event, with regard to ways interested parties might help shoulder some of the organization’s financial burden and help ensure that the festival might continue in some way in the future.  If some way forward is found, Saint Tikhon’s hopes to continue to provide an Orthodox presence.  If, however, this year proves to be the festival’s last, alternate venues will be reviewed to ensure a similar outreach program can continue in the years to come.

Those interested in assisting in sponsoring next year’s team may contact Saint Tikhon’s Seminary Department of Media, Publications, and Public Affairs at 570-561-1818 Ext. 6 for additional information.