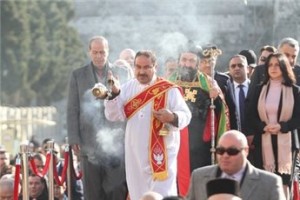 BETHLEHEM (Ma’an) — The Orthodox, Assyrian, Coptic, and Ethiopian patriarchs arrived in Bethlehem on Monday to commence the celebration of Eastern Orthodox Christmas, which takes place on Tuesday.

The Assyrian patriarch was first to arrive, followed by the Coptic Patriarch and Patriarch Theophilos III of Jerusalem, while the Ethiopian patriarch is expected to arrive later.

Most Eastern Orthodox Christian denominations celebrate the birth of Jesus Christ on January 7th, in contrast to the Western Christian tradition of celebrating on December 25.

The Eastern Orthodox date is in accordance with the Julian calendar, which predates the current Gregorian calendar.

The majority of Palestinian Christians are Greek Orthodox and follow the Orthodox Patriarchate of Jerusalem, which celebrates Christmas on Tuesday.

There are around 200,000 Palestinian Christians in the West Bank, Gaza Strip, and inside Israel, while hundreds of thousands more live abroad as well.