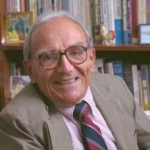 On Tuesday morning, June 26, 2012, Dr. Veselin Kesich, 91, Professor Emeritus of New Testament at Saint Vladimir’s Seminary, Crestwood, NY, fell asleep in the Lord surrounded by his children Carol and Gregory at his residence here. After suffering from a heart ailment for many years, he passed away while under hospice care.

Professor Kesich was beloved by generations of alumni of SVOTS, not only for his academic expertise but also for the hospitality and love he demonstrated to students, along with his wife, Lydia (+ 2006), over the several decades they lived on the seminary campus. Students still fondly recall the annual traditional Serbian “Slava” celebrated in their home, honoring Professor’s family patron saint.

Professor Kesich celebrated his 90th birthday last year, having been born March 12, 1921. On that occasion, his son, Gregory, a newspaper reporter, wrote a touching tribute to him in The Portland Press Herald, titled “The View from 90 Includes More Than a Few Surprises.” The newspaper piece attests to Professor’s unflagging and deep concern for people — all people (even Lindsay Lohan!) — and his equal concern that they minister to each other and to their communities.

Born in Bosnia, Yugoslavia, Dr. Kesich finished the gymnasium in Banja Luka and started studies at Belgrade University. At the end of the Second World War he lived in a Displaced Persons Camp in Italy until he was selected to study theology at Dorchester College in England. In 1949 he came to New York to continue his studies at Columbia University, Saint Vladimir’s Seminary, and Union Theological Seminary, receiving his Ph.D. from Columbia in 1959.

From 1953–1991 he served on the Faculty of Saint Vladimir’s, focusing on New Testament Studies, and from 1983–1984 he served as Acting Dean. His other academic appointments included: 1966–86, Faculty Member, Comparative Religion, Sarah Lawrence College; 1965–1974, Adjunct Professor, Serbo–Croatian Literature, New York University; 1962–1963, Visiting Associate Professor, Dept. of Slavic Languages, University of California, Berkeley; and 1959–1963, Visiting Faculty, Comparative Religion, Hofstra University. When time permitted, he taught elective courses in Serbian Church History, which resulted in several journal articles and essays in books: “The Martyrdom of the Serbs: The Church in the Ustashe State, 1941–1945,” “The Early Serbian Church as Described in the Earliest Serbian Biography,” “Bosnia: History and Religion,” and “Kosovo in the History of the Serbian Church.”

Seminarians interested in scriptural studies, especially during the popular onset of Liberation Theology, historical reconstruction, and the secular Feminist Movement, appreciated Professor Kesich’s spiritually balanced and incisive critical analysis of these movements and trends. Memorable were his several articles in that regard, which were published in the Saint Vladimir’s Seminary Quarterly (SVSQ, now known as Saint Vladimir’s Theological Quarterly, SVTQ): “The Historical Jesus—A Challenge from Jerusalem,” “St. Paul: Anti-Feminist or Liberator?,” and “Paul—Ambassador for Christ, or Founder of Christianity?”

Always Orthodox in his perspective and a willing witness to his faith, he participated as the Orthodox member of several ecumenical dialogues with Lutherans, Presbyterians, Episcopalians, Roman Catholics, and he also served as the President of the Orthodox Theological Society. Additionally, he lectured, participated in panel discussions, and served as a retreat leader to college groups and church gatherings throughout the country. In retirement he had been a guest lecturer at the University of Thessaloniki (1991), at the Summer Institute, Eagle River, Alaska (1997), and in Wells-Next-the-Sea, Norfolk, England (1998).

His most recent book, Formation and Struggles: The Birth of the Church AD 33–200 (2007) fulfilled his desire to re-activate and contribute to The Church in History series published by St. Vladimir’s Seminary Press (SVS Press), a series designed to present church history from the Orthodox Christian scholarly and theological point of view. His other works, all published by SVS Press, include: with Lydia W. Kesich, The Treasures of the Holy Land (1985); The First Day of the New Creation (Crestwood: SVS Press, 1982); The Gospel Image of Christ: The Church and Modern Criticism (1972; second enlarged edition, 1991); and The Passion of Christ (1965; new introduction 2004).

Professor Kesich is still spoken of by SVOTS alumni as their gentle teacher who conveyed the Holy Scriptures to them as the Living Word of God. He most recently lived in Portland, Maine, in a retirement community, where he still enjoyed debating biblical texts with the other residents—especially the also-retired Old Testament professor who lived a few doors down!

May Prof. Kesich’s memory be eternal!