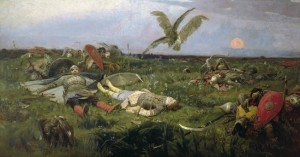 After Igor Svyatoslavich’s fighting with the Polovtsy (1880) is exhibited in the Tretyakov Gallery of Moscow. (Wikimedia Commons)

How recent documentaries show Russia’s tilt toward Eurasianism and Byzantinism.

This week, Ukraine, Russia and Belarus celebrate the 1,025th anniversary of the Christianization of Kievan Rus, a medieval state that existed between the 9th and 13th centuries, which, depending on one’s historical and political stance, is seen as the precursor of these three nations. In Russia, the celebration of this important anniversary included the release of a documentary entitled The Second Christianization of Rus. This film, along with other recent events, shows how the political culture of modern Russia is tilting towards Byzantinism and Eurasianism, the political trends that juxtapose Russia and the West and emphasize the role of Eastern Orthodox Church in the construction of Russia’s identity. While Byzantinism portrays Russia as a political and cultural heir of the Byzantine Empire, Eurasianism allots Russia a messianic role in connecting the East and West. Both schools of thought isolate Russia from the world.

Produced by the metropolitan of Volokolamsk, the chairman of the Department of External Church Relations, Hilarion Alfeyev, The Second Christianization of Rus was shown last week on the state owned TV channel Rossia-1. The title speaks for itself: the years after the fall of the Soviet Union are portrayed as the time of the great religious revival in Russia, i.e., the return of Russian Orthodox faith. Russia’s president, Vladimir Putin, talks throughout the film about the significance of the Eastern Orthodox Church for the building of Russia’s new spiritual identity. Putin says that as a child he was baptized by his mother secretly from his father and that this event affected him for the rest of his life. “There was a spiritual vacuum after the fall of the Soviet Union… true values are religious values… the return to religion marks the natural revival of the Russian people,” he says in the film.

Patriarch Kirill, who also speaks throughout the film, is portrayed as a spiritual leader of the Russian nation. Both Putin and Kirill explicitly abandon the principle of the separation of church and state by proposing collaboration between the Russian Orthodox Church and the Russian State. Russia’s alleged religiosity is juxtaposed to the decay of religion in the West. The Patriarch proposes building 200 more churches in Moscow: No mention of the fact that Moscow today is the largest Muslim city in Europe after Istanbul.

Paradoxically and in spite of its understandable criticism of the Soviet period (when religion was brutally oppressed by Communist authorities), the film is reminiscent of Soviet propaganda. Not a single critical comment is made about the role of the Russian Orthodox Church in history. The support of serfdom, the burning of books, participation in pogroms, and the excommunication of Leo Tolstoy must have all been insignificant events. The Patriarch speaks at length about the importance of building Russian Orthodox churches in Siberia without mentioning the post-Soviet revival of indigenous religions and identities in that part of the country. And of course, the attempts of Kiev to redefine their relations with the Moscow Patriarchate are portrayed as betrayal.

This film is in line with another documentary shown on the same TV channel a few years ago. Entitled The Fall of an Empire: The Lesson of Byzantium, it draws parallels between Byzantium and Russia. The author of the film, Arkimandrite Tikhon Shevkunov, is alleged to be the priest to whom Vladimir Putin comes to confess. Shevkunov, who narrates the film, postulates that Byzantium was superior to the West both in culture and in economy. The “barbarian” West, according to him, became “civilized and capitalist” only after the systematic plundering of Constantinople. The Russians are argued to have grasped the main treasure of Byzantium: the Orthodox faith. Thus, in order to prosper, Shevkunov argues, Russia should trust neither the West nor the East. The West is argued to have an inherited hatred towards Russia’s values. Shevkunov even makes an implicit reference to the institution of the U.S. presidency by ridiculing those Byzantine emperors who stayed in power for only four years. Neither is it wise, according to him, to join big international organizations. The analogy that he cites is the permission given by the emperor Alexios Komnenos to Venetian merchants to conduct free trade in Byzantium: Shevkunov asserts that it led to the destruction of production and agriculture in the empire.

Leaving aside the issue of historical accuracy, one cannot help but be struck by how direct and numerous the historical analogies of this film are. The separation of Serbs and Bulgarians from Byzantium is presented as instigated by the West in order to weaken the empire (an obvious hint at the independence of Kosovo and the joining of the NATO by several Slavic nations). The Renaissance is portrayed as a strange phenomenon (an implicit criticism of the influence of Western popular culture on Russian esthetic values). The emperor who restrained the power of oligarchs is praised as a great patriot (a clear parallel with Putin’s crusade against the tycoons: Mikhail Khodorkovsky, Vladimir Gusinsky, and Boris Berezovsky). At the end of the film, Shevkunov makes the most revealing statement: He claims that it was Joseph Stalin who, in the midst of World War II, gave a personal order to revive the scholarly study of Byzantium in the USSR (it was banned after the Bolshevik Revolution of 1917). “The former seminarian,” Shevkunov concludes, finally realized from which historical periods Russia should learn its lessons.

Considering that neither of these films would have been shown on a state-controlled TV channel without high-level political support, Putin’s statement that “Russia is an inalienable and organic part of Greater Europe and European civilization” is a brazen show of hypocrisy. The Europeanism of Russian culture was advocated by many Russian intellectuals, including the patriarch of Russian intelligentsia, the late academician Dmitry Likhachev, whose ideas were shared by Gorbachev and Yeltsin. Today, Russia is seen by its leaders as a great and unique empire with vast geopolitical interests. It has neither true allies nor friends: both the East and the West are allegedly eager to get control over its vast territories and natural resources.

In this respect, it comes as no surprise that in recent years Russia witnessed a growing interest in the ideas of Lev Gumilev, a historian who called himself “the last Eurasianist.” Gumilev’s 100th anniversary was widely celebrated and commemorated last year. The son of two famous Russian poets, Gumilev suffered tremendously from Soviet oppression. He spent 18 years (1938-1956) – most of his youth – in the Gulag. However, his concepts, including the fashionable idea of “passionarity” (a term he invented to mean the critical ability of a nation to survive and prosper) have been debunked by many professional historians. Gumilev calls Slavic and Turkic peoples the “super-ethne,” while Europeans, according to him, have been for ages in the state of “inertia and obscuration” (terms that Gumilev uses to designate historically ‘insignificant’ nations). A viable ethnos, according to Gumilev, is defined through its ancestral lands. Consequently, “a parasite ethnos” or “parasite state” either lacks or loses its roots. Under this scenario, both the French and American Revolutions – perhaps the two most definitive political upheavals in the modern history of the West – led to the creation of parasite states: the French Republic and the United States of America. According to Gumilev, such states could survive only through the exploitation of someone else’s resources – biological, intellectual, territorial, and natural. Paradoxically, a man who spent a significant portion of his life in jail valued neither a call for “liberté, égalité, fraternité” nor the declaration “that all men are created equal.”

This being said, the sad reality is that a growing number of politicians and intellectuals in Russia seem to believe that “orthodoxy, autocracy, and nationality” — the famous political slogan of Count Sergei Uvarov (1786-1855) — could work today. One wonders whether they even care that Nicholas I (1796-1855), under whom Uvarov was minister of culture, is best-known for his brutal handling of the Decembrists – the Russian aristocrat-revolutionaries who in 1825 attempted to introduce either a republic or constitutional monarchy in Russia. Five of them were hung, while others deprived of their titles and sent to Siberia. One would hope that Russia’s political and religious elites would find a more contemporary and inspiring slogan. Russian history and literature provide a wealth of positive ideas.