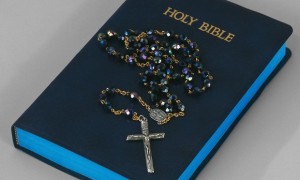 A Russian atheist faces a year in prison after denying the existence of God during an online exchange. Photograph: Lawrence Manning/Corbis

A man in southern Russia faces a potential jail sentence after he was charged with insulting the feelings of religious believers over an internet exchange in which he wrote that “there is no God”.

Viktor Krasnov, 38, who appeared in court Wednesday, is being prosecuted under a controversial 2013 law that was introduced after punk art group Pussy Riots was jailed for a performance in Moscow’s main cathedral, his lawyer Andrei Sabinin told AFP.

The charges – which carry a maximum one-year jail sentence – centre on an internet exchange that Krasnov was involved in in 2014 on a humorous local website in his hometown of Stavropol.

“If I say that the collection of Jewish fairytales entitled the Bible is complete bullshit, that is that. At least for me,” Krasnov wrote, adding later “there is no God!”

One of the young people involved in the dispute with Krasnov then lodged a complaint against him accusing him of “offending the sentiments of Orthodox believers”.

Krasnov, whose case began last month, spent one month in a psychiatric ward last year undergoing psychiatric examinations before he was finally deemed to be sane.

Krasnov’s lawyer insisted to AFP that his client was “simply an atheist” and that he had taken aim at both “Halloween and Yiddish holidays” in the same exchange.