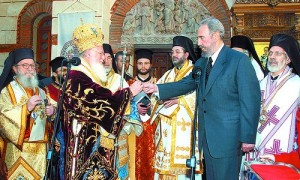 Greek Orthodoxy has taken root in the unlikeliest of places, Havana, the capital of Cuba, which had been a hotbed of political turmoil ever since it gained its independence in 1902, technically from the United States, which had liberated it from Spain four years earlier in the aftermath of the Spanish-American War.

A half century later, the first Greek Orthodox Church, Saints Constantine and Helen, was built in Havana in 1950. But it never had the opportunity to be used as a church. Political turmoil uprooted the nation again, and in 1959, the Communist Party of Fidel Castro Ruz rose to power via revolution, overthrowing the government of Fulgencio Batista, and continues to rule the island nation to this day – though Castro stepped down in 2008 at age 81, succeeded by his younger brother Raul.

SEMPER FIDEL
Fidel Castro from the start of his reign made it clear that Christianity – and religion in whole – was contradictory to the tenets of Marxism, on which the revolution was founded. The faithful either went into hiding, or were exiled, or fled.

But when Pope John Paul II visited Cuba in 1997 and called for religious freedom, Castro began to have a change of heart. Restrictions began to be lifted, and Christianity was given a chance to regrow. 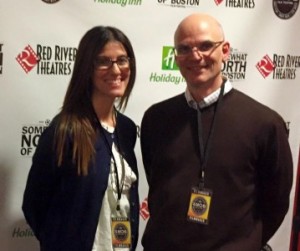 A Beacon in Havana is a documentary produced by 21/31 Productions, established by Fay Efrosini Lellios and her brother, George. Both siblings are Boston University graduates with years of experience in the industry before 21/31.

The 18-minute documentary, which Fay Lellios shared with TNH, tells the story of the founding of the St. Nicholas Church in Havana, in 2004, and the efforts to make that happen after Pope John Paul II broke through the initial barrier.

Metropolitan Archbishop Athenagoras of Mexico explains that the Cubans know more about Orthodoxy than the inhabitants of most Latin American countries precisely because of Russia’s role there in the Castro years, and because many Cubans studied in Russia and thereby became immersed in that country’s rich Orthodox tradition.

Athenagoras tells of his first visit to Cuba in 1997, representing the Ecumenical Patriarchate, and his difficulties in reestablishing the church there. It was a catch-22 insofar as they Greek community could not be registered without clergy, and clergy were not allowed to be brought in because the community was not registered. But he persisted, and returned to Cuba every three or four months, attempting to have the Sts. Constantine and Helen Church – long since closed and used as a theater – returned to the Greek Orthodox community.

In 2000, Athenagoras explains, he learned that exiled King Constantine II of Greece was to visit Cuba. Expecting that the king would meet with Castro, he implored upon him, via a telephone call to London – where Constantine lived at the time – to persuade Castro to return the church to the Greeks. “Castro gave his hand, and said ‘no problem,’” Athenagoras describes. But then, the dictator’s foreign minister jumped in and reminded Castro that the Russian Church wanted the building, too. “I gave my word,” Castro responded, “find a solution.”

Three years later, Castro wrote to Ecumenical Patriarch Bartholomew, inviting him to go to Cuba to consecrate the church.

Athenagoras thanked Castro for this invitation, but the Cuban leader responded: “we thank you, for bringing Orthodoxy to Cuba.”

BEACON’S TOUR
Lellios told TNH that the film has been screened in various locales throughout the United States and the world, thus far: at the Greek Film Fest in Chicago, the London Greek Film Fest, the Greek Australian Short Film Fest (in Sydney and Melbourne), at the Georgia Latino Film Festival, and the Somewhat North of Boston Film Festival in Concord, NH.

“We also screened in a wonderful academic environment at the Bancroft School in Worcester, and we have heard of at least four more Festivals interested in screening our documentary,” she added. 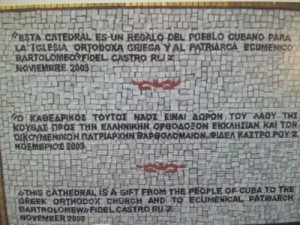 The official inscription depicting the consecration, written in Spanish, Greek, and English, reads: “This Cathedral is a gift from the people of Cuba to the Greek Orthodox Church and to Ecumenical Patriarch Bartholomew – Fidel Castro Ruz November 2003.”

Costa Mavraganis, Director of Hands of Humanity (a humanitarian organization), is also interviewed in the film, describes the “good relations with the Cuban government, which is really important because it will allow the Church in the future to really grow.” He deems the St. Nicholas Church as “really something special. It is the only church built by Fidel Castro’s government.”