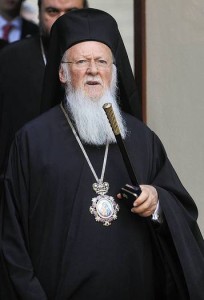 Ecumenical Patriarch Bartholomew of Constantinople is the leader of Orthodox Christians. (OZAN KOSE, AFP/Getty Images / May 11, 2013)

Springfield is a long way from Istanbul — 5,660 miles, in fact — but Illinois state senators are considering a resolution that would criticize Turkey’s treatment of the Eastern Orthodox religious hierarchy. Even though a majority of senators have co-sponsored the nonbinding measure, it may not make it to a vote.

Orthodox Christians say their leader, Ecumenical Patriarch Bartholomew of Constantinople, has been marginalized and mistreated by a Turkish government that has also seized church lands, imposed onerous citizenship requirements and closed an important religious school. Local Orthodox officials say the resolution will raise awareness about the church’s status in Turkey and make an important statement about religious freedom everywhere.

“As a nation, we stand for something better, something higher,” said Bishop Demetrios of Mokissos, chancellor of Chicago’s Greek Orthodox Metropolis. “Why shouldn’t we stand for religious liberty of people living around the world?”

Turkey’s consul general to Chicago, Fatih Yildiz, said his government supports religious tolerance, respects the patriarch and is working to address many of the grievances outlined in the resolution. Yildiz believes the resolution is “not fair to Turkey” and not within the purview of Illinois legislators.

“Frankly speaking, there’s always room for improvement with respect to religious freedom, including Turkey,” Yildiz said. “We believe that we continue to review and enhance the rights of the religious minorities.

“It’s part of our fabric, this multicultural and multireligious element.”

Yildiz and Demetrios both emphasized that the current Turkish government has made important overtures to the Orthodox faithful. A large parcel of land around the closed religious school was recently returned to the church. The government has also made it easier for Orthodox leaders to acquire Turkish citizenship, a requirement for ascending to Bartholomew’s post.

“Believe me,” Yildiz said, “everyone is doing their best in creating the right atmosphere for this. What we need is not criticism but acknowledgment of the fact that Turkey has done a lot and has the political will” to support religious minorities.

Turkey, an officially secular state on the border of Europe and Asia, is the historical home of the Orthodox Church, though 99 percent of Turks are now Muslim. Bartholomew serves as the spiritual leader of 250 million Orthodox Christians worldwide.

The resolution, which has been co-sponsored by 41 of 59 senators, is currently lodged in the Assignments Committee and has not been scheduled for a vote.

Most General Assembly resolutions are locally focused and uncontroversial, often honoring the life of a recently deceased person, supporting awareness of a disease or, in one instance, commemorating a library’s 40th anniversary. A few delve into thornier international issues, including resolutions before the House this year dealing with business in Cuba and U.S. relations with Taiwan.

Senate President John J. Cullerton’s office “discourages foreign policy resolutions,” said Rikeesha Phelon, a spokeswoman for the North Side Democrat. She wouldn’t make Cullerton available for comment or answer questions about whether a vote will take place before the legislative session ends on May 31.

The resolution passed the Illinois House in 2007 and has the support of the Chicago City Council and leaders of other faiths, including Roman Catholic Cardinal Francis George. With the resolution’s path forward in the Senate unclear, George Vranas, a leader of an Oak Lawn congregation, still hopes to see progress.

Share. Twitter Facebook Pinterest LinkedIn Tumblr Email
Previous ArticleOrthodox priests to use their status in rural communities to promote agriculture measures in Romania’s countryside
Next Article Jerusalem pilgrims get ink by same family that has been tattooing the faithful for centuries