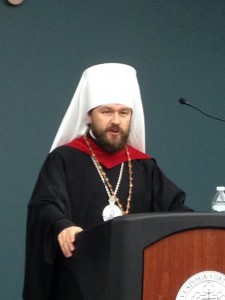 YONKERS, NY [SVOTS Communications]  On November 8, 2014, at a special academic convocation, the Board of Trustees and faculty of Saint Vladimir’s Seminary here awarded His Eminence, Metropolitan Hilarion [Alfeyev] of Volokolamsk, Chair of the Moscow Patriarchate’s Department for External Church Relations, an honorary Doctor of Divinity degree. Metropolitan Hilarion was on campus to present a public lecture, “Primacy and Conciliarity from an Orthodox Perspective” — a topic of critical importance to the Joint Commission for Theological Dialogue between the Orthodox and the Roman Catholic Churches, of which he is a key participant.  [The complete text of Metropolitan Hilarion’s lecture may be found here.

Metropolitan Hilarion is also an appointed member of the seminary Board of Trustees and author of the SVS Press Orthodox Christianity Series.

Upon receiving the honorary degree, Metropolitan Hilarion expressed gratitude for his longstanding relationship with Saint Vladimir’s Seminary, noting the seminary’s crucial role in building trust between Orthodox Churches throughout the world. In his lecture, he defined Church structure and organization as understood by Christians of East and West.

“There are two traditions,” Metropolitan Hilarion noted. “The West is centralized, and primacy is understood as descending directly from the first Pope. No such primacy has ever existed in the Orthodox East, which is decentralized and based on the notion of communion between local autocephalous churches.

“When the Great and Holy Council of the Orthodox Church, scheduled for 2016, convenes,” he added, “the Ecumenical Patriarch will occupy a central seat, but only in the midst of his fellow primates, who will be arranged around him according to the diptychs of the Church.

“By contrast, in Roman Catholic councils the Pope is seated on an elevated throne and separated from his fellow hierarchs,” he explained. “For the Orthodox, synodality is higher than primacy.”

His Beatitude, Metropolitan Tikhon, attended the lecture, as did His Grace, Bishop John of Naro-Fominsk, Administrator of the Patriarchal Parishes in the USA.  Also present were clerics of the Anglican Church in North America and the Pentecostal Convergence Movement. [See related article concerning the meeting between the Anglican delegation and Metropolitan Hilarion.]

Earlier in the day, Metropolitan Hilarion met with Metropolitan Tikhon, as well as SVOTS administrators, before joining the community for Vespers. He also traveled with a delegation to celebrate a Panikhida at the grave of renowned Russian composer Sergei Rachmaninoff in Valhalla, NY. Metropolitan Hilarion also is a gifted composer; in 2011, more than 1,000 New Yorkers attended the English premiere of his composition, Saint Matthew Passion, sponsored by Saint Vladimir’s Seminary and presented at the Church of Saint Paul the Apostle in Manhattan.