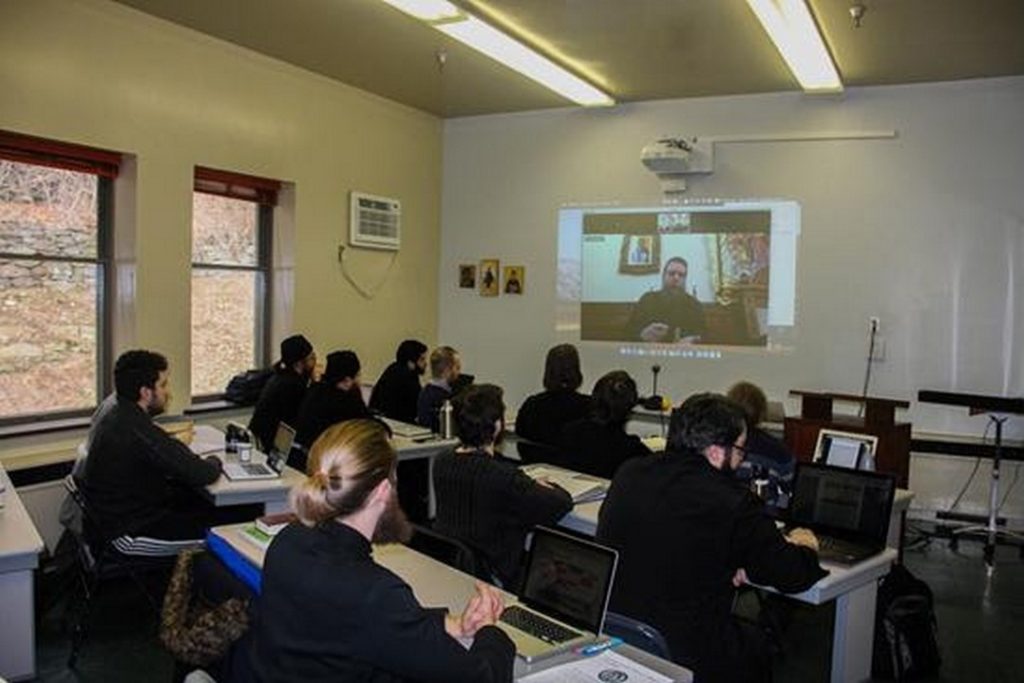 [SVOTS Communications / CONSTANTINOPLE] In the spring of 2018,SVOTS Seminarians engaged in a remarkable undertaking, engaging with representatives of churches that both did and did not participate in the divisive Holy and Great Council of the Orthodox Church in 2016, often referred to as the “Council of Crete.” Now, the fruits of these seminarians’ unique venture are in the hands of the Ecumenical Patriarch, His All-Holiness Bartholomew.

At the Ecumenical Patriarchate in Constantinople on Tuesday, May 22, with the blessing of His Beatitude Metropolitan Tikhon, and with the support of Seminary President Archpriest Chad Hatfield, Archpriest Alexander Rentelpersonally delivered the Appeal on the Future of Pan-Orthodox Activity,drafted by seminarians of his elective class, CL342, “Contemporary Issues in Canon Law.” During the course of the meeting, His All-Holiness talked with Father Alexander about the Council in Crete and issues facing world Orthodoxy. 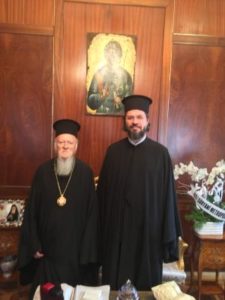 “It was a rare and unexpected blessing to be able to present my students’ Appeal to His All-Holiness in person,” said Fr. Alexander. “As can be seen from the text of the Appeal, the seminarians are full of zeal and enthusiasm for this cause.”

Read An Appeal on the Future of Pan-Orthodoxy

“The reception of the Council remains uncertain and divisive, placing communion amongst the local Churches of the One, Holy, Catholic, and Apostolic Church at risk,” the opening of the Appeal reads. “In the spirit of over fifty years of invested conciliar activity, and calling the events surrounding the Council to mind, we respectfully petition Your All-Holiness and all Primates of the Orthodox Churches to incline your ear and listen to our appeal.”

The Appeal goes on to address concerns and suggestions in the aftermath of the council. Fr. Alexander’s Canon Law students drafted its content after considerable effort and study over the course of the semester.

“Drawing upon our experience of attempting to work in a conciliar manner in this course, we greatly appreciate the difficult nature of conciliar work,” the students wrote. “The drafting of this appeal itself was a challenge for all of us. But we have learned that the conciliar process is a microcosm of the Christian life. Through it we learn how to better speak the truth to each other, challenge each other, compromise with each other, and forgive each other.”

Much planning went into the structure and content of Fr. Alexander’s class in order to prepare his students to carry out such an effort as well as to impart important perspectives to them through the course.

“I intended this class to be an interdisciplinary examination of the Orthodox conciliar movement from the nineteenth to the twenty-first century that led to the Holy and Great Council in Crete in 2016,” explained Fr. Alexander. “In this course, I sought to have the seminarians understand the theological presuppositions of the movement and measure them against the canonical tradition.”

The class began with lectures providing an overview of canonical tradition (methodology, sources, and the history). The class then shifted to a seminar format to discuss the theological underpinnings of the conciliar movement, its history, and the Council in Crete. Special attention was paid to the Council in Crete, its decisions, and message.

The course also incorporated a number of guest speakers who had expertise on particular aspects relating to the subject of the course. Prior to the beginning of the class, Fr. Alexander interviewed His Eminence Metropolitan Hilarion (Alfeyev) of the Patriarchate of Moscow. During the class, His Eminence Metropolitan Gabriel of the Church of Greece participated via Skype and spoke to the class about the document from Crete on autonomy. St. Vladimir’s Seminary Professor Priest Anthony Roeber also spoke to the class on the Council in Crete from the perspective of the Antiochian Patriarchate and what the view of the Council was from a parochial level. Likewise, Priest Hyacinthe Destivelle, O.P., of the Pontifical Council for Promoting Christian Unity participated in the class via Internet to discuss his book, The Moscow Council (1917–1918).

“The class, in other words, heard a wide perspective of thought on the Council,” added Fr. Alexander.

The class concluded with an in-class project of drafting a course message. This portion of the class was led by Protopresbyter Nicolas Kazarian, who assisted the drafters of the Message and Encyclical promulgated by the council in Crete, and who is an expert in Orthodox Christianity and geopolitics and the parish priest at St. Spyridon Greek Orthodox Church in New York City.

“It was my intention that the seminarians have an opportunity to work in a collaborative, conciliar manner so as to have that experience, but also to have a sense of what kind of work goes into the drafting of such texts. I assigned the topic and monitored the progress, but Fr. Nicholas and the seminarians drafted the Appeal. I have read the Appeal and fully support its content.”

The students’ efforts culminated fittingly with the delivery of the Appeal to the Ecumenical Patriarch after the conclusion of the semester.

“His Eminence Metropolitan Gabriel reminded the class in the presentation that the initiation of any Pan-Orthodox activity is a ministry particular to the Ecumenical Patriarch. Hence the seminarians addressed the Appeal to His All-Holiness first in light of this unique role the Ecumenical Patriarch has, and then also to the Most-Blessed Primates of the Most-Holy Local Orthodox Churches in order to encourage them.”

Fr. Alexander is thankful that his vision and planning for the Canon Law course has led to such a unique and fruitful experience for his students, many of whom graduated in the Class of 2018 and all of whom will undoubtedly carry this experience with them in their varying work for the Church after seminary.

“My work for this class would not have been possible without the strong support of Archpriest Chad Hatfield, president of St. Vladimir’s Orthodox Theological Seminary. I note also that Fr. Nicholas Kazarian has been a wonderful collaborator. Above all, I am proud of my students for the work that they accomplished.”

Funding for one guest lecturer in this course, Protopresbyter Nicolas Kazarian, was provided by the Ganister Orthodox Foundation Fund. Read a paper by Fr. Nicolas, titled, “The Crisis of Orthodox Multilateralsim: A Challenge for Pan-Orthodox Conciliarity “in the forum blog,” Public Orthodoxy,” here.