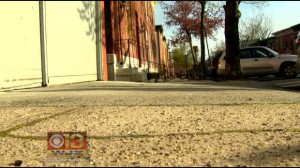 BALTIMORE —Baltimore City police are looking for a group of teens involved in a beating and armed robbery outside a Russian Orthodox church that left a priest and his son staring down the barrel of a gun.

The incident happened around 10 p.m. Wednesday as members of the Transfiguration of Our Lord Russian Orthodox Church were cleaning up after a service. The church is located at the corner of South Collington Avenue and Baltimore Street in the city’s Butchers Hill area.

The church does not think it was targeted. It does want this case in the public eye to help catch those teens.

The son of the priest and a friend of his were outside the church when they said a group of five or six teenagers who were 15-18 years old approached.

“They came up and they walked past us, and I guess they thought we said something to them. We were talking between ourselves in Romanian — and they got in our faces and they said, ‘Empty your pockets,'” recalled victim Ion Barbus.

Before he knew it, Barbus said he had a gun to his chest, and his friend was on the receiving end of at least a dozen blows to the head. The priest heard the commotion and came outside.

“He asked the gentlemen, ‘What’s going on out here.’ The gentleman with the gun turned to the priest and held the gun on him and then told him not to move,” said church member Anton Marx.

The teens ran away, but not before taking cash and an iPhone, police said.

As the church prepares for one of the holiest weekends in the Christian faith, members said they are concerned, and the church’s leadership is showing no mercy for the young assailants.

“I believe that it was just a case where you had some juvenile thugs out on the street that shouldn’t have been out on the street. Perhaps they should be home, maybe reading a book,” Marx said.

Barbus is the same age as his alleged attackers. He said their values appear to be worlds apart.

“Since I was a little kid, even in a different country in Eastern Europe, my parents taught me the most valuable thing is a person’s life. You can’t just risk that, and here, kids are just walking around with guns, threatening other people like it’s nothing,” Barbus said.

The church is holding evening Easter services. The members said they’re concerned about the violence, so they’ve requested city police give the church some security over the holiday weekend.