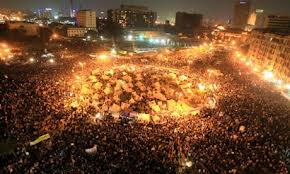 Cairo (Agenzia Fides) – The meeting announced by the new Coptic Orthodox Patriarch Tawadros II with a qualified Egyptian delegation of the Catholic Churches – which would have also provided the opportunity to agree on a common position before the emergency which the Country is crossing – has been postponed to December 11. A reason for postponing is due to the tension that reigns throughout Egypt and especially in the capital, after the constitutional decrees with which President Morsi has expanded his powers and have sparked violent protests against the government and also the headquarters of the Muslim Brotherhood.

“In this situation – explains to Fides Agency the Bishop of Assiut, Kirillos William, Patriarchal Vicar of the Catholic Copts – it was prudent not to expose at risk a meeting of qualified representatives of the Christian Churches.” The meeting would have been attended by several Catholic Bishops, along with senior representatives of the laity. Patriarch Tawadros, from the monastery of Anba Bishoy in which he resides, has also canceled a meeting with members of the spiritual section of the Muslim Brotherhood.

Today in Tahrir Square the presidium of the parties and social forces that accuse President Morsi of having now embarked on the road of the authoritarian path is scheduled. According to the organizers, the symbolic place of the Egyptian revolution will see a million protesters. The Muslim Brotherhood has canceled a simultaneous mobilization called in support of the government, justifying it as a responsible choice aimed at defusing possible accidents. “But some observers – adds to Fides Bishop Kirillos – begin to mention the risk of a civil war. If the political and social tension does not calm down, things could escalate. At the headquarters of the Muslim Brotherhood attacked in recent days, weapons and ammunition were also found.”

On Saturday, because of the state of emergency, Tawadros canceled even his first patriarchal visit to Alexandria. In that case, as Catholic Latin Bishop Adel Zaki, OFM, Vicar Apostolic of Alexandria explains to Fides Agency, to justify the postponement of the trip was not just for safety reasons: “The entry of the Patriarch in our city can only be a great demonstration of popular joy, with songs and music and fun. At a time like this, Christians would have given the impression of living out of the world in which they all live. As Saint Paul teaches, you must suffer with those who suffer and rejoice with those who rejoice.” (GV) (Agenzia Fides 27/11/2013).