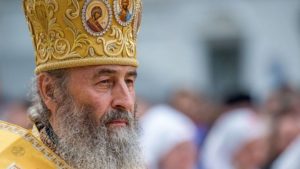 An Exclusive Interview on the Ecclesiastical Events in Ukraine

In this interview with the program “Morning With Inter,” His Beatitude Metropolitan Onuphry speaks about his position on the latest Church events connected with the actions of the Patriarchate of Constantinople in regard to the Ukrainian Orthodox Church. The Ukrainian primate calls on the people of Ukraine to fear nothing, to preserve the purity of the Orthodox faith, and to live with God.

Today we are being dragged into the format of a political party, so that Christ would not lead us, but politicians. If I had wanted to be a politician I would have gone straight to politics. Although I had such chances in my youth, I rejected them. Having put on spiritual clothes, I must take care of the spiritual and do spiritual things. Those who have put on riassas but are actively engaged in politics are developing geopolitical plans—they are just dishonest people who couldn’t become real politicians, but turned into shapeshifters to attract human attention to themselves with the help of a spiritual image. It’s dishonorable. These people will have to answer before God for it.

We are an autonomous Church and we have all the attributes of independence that are necessary today for the normal service of God and the people. We have our own Synod, dependent upon no one, and we have our own Bishops’ Council, dependent upon no one. The decisions of our Council are final and no one can challenge them or veto them. We have our Ukrainian Orthodox Church ecclesiastical court, which is the final authority. We have economic and administrative independence. A tomos would restrict the freedom we have today. If someone needs it, please, they are welcome. We don’t need it. We have independence, autonomy, we have all the attributes of a free life that are necessary for successful ecclesiastical service to the people.

The Patriarchate of Constantinople has sent its two exarchs to Ukraine. Such actions—sending their legates, their exarchs to our independent Church—are anti-canonical.

Today the great empire of Byzantium has become Turkey and the faith there now is not Orthodoxy. You can count the Orthodox believers there today on your fingers. Those who brought their homeland to the point that it turned from an Orthodox power into a Muslim state want to command us and teach us how we should live. They also want to lead our Ukraine to the same state they led their own homeland to. Thus, they have neither the moral nor canonical right to appoint exarchs here and interfere in our affairs.

The Church cannot live according to the standards of secular life. Secular life, especially political, is mixed with intrigues, deceptions, and betrayals—a collection of all evils. The Church cannot live according to such measures and norms. The Church lives by the commandments of Christ. We have our own methods for fighting evil: prayer, repentance, patience, humility before God and one another—these are the powerful weapons that destroy evil.

Priests are called to be peacemakers, not politicians who divide the people. The ideology that’s being promoted today is not a godly ideology. And that special “morality” that’s being planted in our society will not become Christian, but anti-Christian. New rules are being introduced: gay marriages, abortions, murder, and the like. It is contrary to Christ; God does not bless it.

The Church fulfills its mission—it leads man to God. It reminds people that we are all creations of God, and calls us to love one another, to be patient with one another, and to help one another. I know that the Church will exist until the end of the world because the Lord said that the gates of Hell shall not prevail against it (Mt. 16:18).

I would like to address all the Orthodox faithful of Ukraine: Fear nothing, be firm in your love for God, and preserve the purity of the Orthodox faith that is the road leading to God. Love one another, suffer one another, help one another. Evil will pass, but good will live eternally. If we endure everything and live in love for all, then no evil will defeat us. God is the God of strength, but evil has no power. Live with God! Be joyous, happy, and blessed!

Share. Twitter Facebook Pinterest LinkedIn Tumblr Email
Previous ArticleSTATEMENT OF THE HOLY SYNOD OF THE RUSSIAN ORTHODOX CHURCH CONCERNING THE UNCANONICAL INTERVENTION OF THE PATRIARCHATE OF CONSTANTINOPLE IN THE CANONICAL TERRITORY OF THE RUSSIAN ORTHODOX CHURCH
Next Article Abuse victims’ outcry more powerful than efforts to silence them, pope says