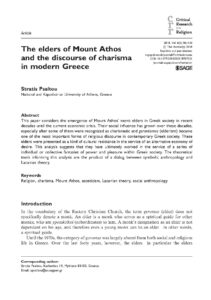 by Stratis Psaltou
National and Kapodistrian University of Athens, Greece

This paper considers the emergence of Mount Athos’ monk elders in Greek society in recent decades until the current economic crisis. Their social influence has grown over these decades, especially after some of them were recognized as charismatic and gerontismos (elderism) became one of the most important forms of religious discourse in contemporary Greek society. These elders were presented as a kind of cultural resistance in the service of an alternative economy of desire. This analysis suggests that they have ultimately worked in the service of a series of individual or collective fantasies of power and pleasure within Greek society. The theoretical tools informing this analysis are the product of a dialog between symbolic anthropology and Lacanian theory.