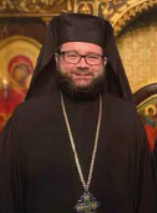 Since 1936, when America was coming out of the Great De­pression, the expression “the Spirit of Cleve­land” ever alludes to the greatly resilient spirit of our nation. Ever since, Cleveland has stood out on the national level in many other ways. The Cleveland Orchestra, the Art Museum, NASA, and the Rock and Roll Hall of Fame are just a few as­pects of Cleveland’s outstanding character. From an Orthodox Christian perspective, Cleveland’s spirit is evident in its 24 Orthodox churches and dynamic pan-Orthodox life, which led it to be labeled by the Orthodox Christian Laity (OCL) Conference in 2018, as “the Pan-Orthodox City” of America. Yet, in spite of all this, until now, Cleveland never had an Ortho­dox Bishop.

This changed on November 12, 2019, when Cleve­land gained a new reason to shine with even more brightness. Calling to mind the fact that, in 1935, the first Romanian Bishop, Policarp (Morusca), first came to Cleveland, the Holy Synod of the Orthodox Church in America gave to the Auxiliary Bishop-Elect ANDREI, of the ROEA, the title “of Cleveland.” Of course, His Eminence, Archbishop NATHANIEL (Popp), who has led the diocese since 1985, had everything to do with it. He proposed this title in order to salute the great historical role of Saint Mary Romanian Orthodox Cathedral in the Romanian Orthodox Episcopate in America. It is an honor for the City of Cleveland to now have, besides the Roman-Catholic Bishop, an Orthodox Bishop; another feather attached to the public image of the city. It is also a challenge for the new auxiliary Hierarch, a doctor in Theology from the Pontifical Oriental Institute in Rome, to step into the spirit of Cleveland. The Romanian community here published the first Romanian newspaper in 1904; it has four churches, a museum and a great ethnic festival. The statues of composer George Enesco and Civil War hero, General George Pomutz, enhance our city. Keeping in mind the cultural, spiritual and historical merits of Cleveland Romanians, it is a great honor and responsibility for the new Bishop to be connected to the “Forest City”.

On February 1, 2020, Archimandrite ANDREI (Hoarste) will be ordained a Bishop by His Beatitu­de, Metropolitan TIKHON of the Orthodox Church in America, assisted by His Eminence Archbishop NATHANIEL and other hierarchs. The event will take place in Saint George Romanian Orthodox Cathedral, Southfield, Michigan, the diocesan cathedral of the Romanian Episcopate of America. On February 2, at 9:30 a.m., Bishop Andrei will officiate his first Divine Liturgy in his cathedral, Saint Mary Cathedral, 3256 Warren Road, Cleveland. Father Alessandro Marghe­ritini, President of the Greater Council of Orthodox Clergy in Cleveland, rejoiced when he heard the news. The Very Reverend Fr. Remus Grama, Dean of the Cathedral and of the Great Lakes Deanery, who has been serving this historical parish and landmark of Cleveland for the last 30 years, also cheered this news.

Both Cleveland’s Pan-Orthodox and Romanian community here are getting ready for the upcoming event and pray for the newly-elected hierarch and his future mission. The Romanian Orthodox Episcopate of America has 105 parishes, missions and monaste­ries in the USA and Canada and is headquartered in Jackson, Michigan.