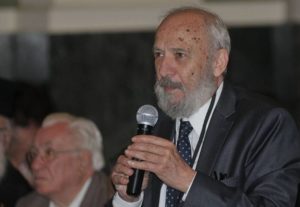 This Saturday, December 15, the final stage in the process of the Ecumenical Patriarchate’s granting to the Ukrainian Orthodox Church the canonical status of Autocephaly takes place in the famous St. Sophia Cathedral in Kiev.

When this event was announced in Constantinople after a decision of the Holy Synod, our correspondent Maria Sereti M.Th. took an interview from the President of the Center of Ecumenical, Missiological and Environmental Studies “Metropolitan Panteleimon Papageorgiou (CEMES), Emeritus Professor Petros Vassiliadis, who was with members of CEMES conducting a scientific research on the Ukrainian crisis.

The questions focused on the Ukrainian autocephaly, and the discussion went around this CEMES project, the Orthodox unity, the issue of autocephaly in today’s context, who is authorized to grant it, the theological arguments of the Ecumenical and Moscow Patriarchates, the responsibilities of all the parties involved (EP, MP and UOC MP), the Holy Canons and their contextualization, the primacy question in Orthodoxy, and the development during the last centuries of its «negative» identity

An interview with the President of CEMES, Emeritus Professor Petros Vassiliadis.

Maria Sereti: What is the CEMES doing with regard to the Ukrainian crisis?

Petros Vassiliadis: The CEMES foundation, which I preside, has launched a scholarly research on Orthodox unity as a continuation of the new era in the Orthodox tradition, which started with the Holy and Great Council. As indicated in our main websites on the subject (Panorthodoxcemes.blogspot.gr, and the related page in social media «Panorthodox Synod” [Facebook]), we now, and for the last three months, focus almost exclusively on the Ukrainian problem.

As the Orthodox unity had suffer a serious blow by the last-minute decision of the Russian Church, together with her allies (Antioch, Georgia, Bulgaria) not to participate in that long-awaited – and for nearly a century being prepared – Synod, being the ultimate expression of the Orthodox faith, so also now the un-psychological decision of the Holy Synod of the Moscow Patriarchate (MP) to break Eucharistic communion with the Ecumenical Patriarchate (EP), made us continue more fervently our quest for Orthodox unity. More precisely, because that canonical action is going to have tremendous consequences in the Orthodox diaspora, where the great majority of Orthodox from all jurisdictions have succeeded in establishing cooperation in the spirit of unity and common Orthodox witness. Obviously, the determination of the EP to heal the de facto schisms in her canonical territories, and possibly beyond, e.g. in FYROM, has forced us to focus on the serious Ukrainian crisis right from the very start of the debate.

MS: What is your opinion, professor, about the Ukrainian Autocephaly, especially after the late events?

PV: Throughout the entire debate we tried to keep a neutral as possible position, even after the decision of the MP to break communion with the EP, canonically holding the «presveia timis,» i.e a primacy of honour and service not simply as an honorific title but with certain administrative prerogatives. For this reason, as academic theologians we were involved in the theological debate on the issue of the granting of autocephaly in a single and united Orthodox Church in Ukraine. After the catalytic evidence on the issue officially produced by the EP, we eagerly expected the official counter arguments from the MP, which delayed to officially present. Only anonymous comments and semi-official responses were published, the most serious being the one by prof. Mickail Zheltov, member of a MP synodical committee, with an older treatise, which naturally did not respond to the most recent arguments of the EP. And we eagerly anticipated an equally strong official theological argument by the MP, if this great Orthodox Church was to re-enter the theological discussion on equal scientific footing. So far, the MP followed a rather communication strategy, repeating in the last speech of His Holiness Patriarch Cyril the conspiracy theory, namely that the entire process was politically motivated and that it is all about evil forces wanting to destroy the Russian Church.

The main document on which this painful division in a large country, populated mainly by Orthodox, could be resolved was the 1686 Patriarchal act, by which only the right to ordain the Metropolitan of Kyiv was granted to the Patriarch of Moscow, because of the difficult situation at that time, on the clearly expressed condition to follow the decision of the Kyivan clergy-laity assembly, and most importantly to commemorate the Ecumenical Patriarch, something that evidently proves that the Kyivan Metropolia still remained under the omophorion of the Ecumenical Patriarch. Instead, the EP argument went on, the MP uncanonically annexed to its jurisdiction the Kyivan Metropolia and the entire Ukrainian Lands.

MS: Does the MP continue this strategy in the dispute?

PV: Something I have a feeling is changing. Quite late there is an attempt to officially (?) answer the EP arguments; and at the end of November the site of the MP DERC posted prof. Zheltov’s treatise (the old article that in September reappeared on some electronic media), translated into Greek. Being a renowned liturgist, prof. Zheltov skipped the condition of the commemoration by the Kyivan Metropolitan of the Ecumenical Patriarch, a clear evidence to which jurisdiction the Kyivan Metropolitan belonged (see note 130, interpreting this condition as “no more than simple good wishes”). Both the official MP response to the EP arguments and Prof. Zheltov long article rightly insist on the unity of the Kyivan and Moschovite Rus. However, this is a past history, not by no means relevant to the present situation, where the vast majority of the Ukrainians consider Russia as an aggressor country and the head of the MP as persona non grata.

MS:  In this case, who is primarily to be blamed?

PV: Certainly not the EP; it has to defend its canonical rights. The MP on the other end is also obliged to defend its canonical jurisdiction – as the EP does – using whatever arguments it considers appropriate. The blame – with regard both to the Orthodox unity and, more importantly, to the Rus Kyiv-Moscow unity – is exclusively to be laid on the Ukrainian Orthodox Church under the Moscow Patriarchate (UOC MP), which is slavishly following in all its decisions the Russian Church, both in refusing to meet the Constantinopolitan Exarchs, to whom they could request whatever conditions they wished and even condemn the EP decision, and in repeating the MP arguments in its last synod at the Lavra of the Caves – instead of the meeting with the President of Ukraine as it was agreed, a synod considered by some as an ecclesiastical coup both in view of its sudden invitation and because of its decision to deny the right of a free conscious decision to its hierarchs – by refusing to participate in its entirety in the unification process. If they had decided differently, they could secure to a large extent both the legitimate control of the autocephalous-in-the-process Orthodox Church in Ukraine, and – what is even more important – they would determine and pursue the actual unity between Ukrainian and Russian Orthodoxy.

MS: What about the break of Eucharistic communion? Can you tell us something more about it?

PV: The decision of the MP to use the Divine Eucharist, the ultimate Orthodox characteristic of self-identity, for an administrative dispute will create, as I said, numerous problems in our effort to retain the Orthodox unity, especially in the Orthodox diaspora, where this unity has been achieved in practice during the last decades. That measure was used by MP also for the Estonia territorial dispute but was lifted after few years. This we also pray to happen again. Otherwise, and in view of the possibility of the Ukrainian Greek Catholic Church joining after the necessary canonical steps the new scheme, many devoted Orthodox would possibly prefer the union with the Roman Catholic Church, especially with the Present Pope, rather than with the Russian Church, especially with her current  Russkii Mir theory, which in very many respects is contrary to the more holistic mission document of the Holy and Great Council, under the title “The Mission of the Orthodox Church in Today’s World,” a document that the Russian Orthodox Church, after all, has officially the most reservations.

MS: Is this in your opinion, professor, the right way to grant autocephaly?

PV: In all similar cases in the past and the previous century canonical irregularities, resulting in schismatic situations – most notably in my own Greek autocephalous Church – the Ecumenical Patriarchate intervened, following the Canons of the Ecumenical Councils, and healed the schism bringing millions of Orthodox back to the canonical Orthodox Church by granting them autocephaly. This also happened to all newer Patriarchates and Autocephalous Orthodox Churches. Several arguments have been unofficially presented for the possibility of a Ukrainian autocephaly: “Why now?” But the real objection should be “why so late?”

Canonically, and legally in general, speaking, an irregularity does not change the canonical tradition. And to be honest, the Ecumenical Patriarch, despite being questioned as the “Protos, according to the canonical tradition of the Orthodox Church, by the Russian Church in numerous occasions – even creating obstacles to the ecumenical dialogue, especially with the Catholics – he preferred not to halt the century-long prepared process toward the long-anticipated Pan-Orthodox Council. Another argument was that the schismatics and anathematized – measures that were imposed in a legalistic and semi-nationalistic way, and not in the philanthropic one of the oikonomia that canons request– did not repent.

The inability of the UOC MP to solve the problem, and thus retain Orthodox unity in the country, has inevitably forced the Ecumenical Patriarchate to act as it did: by revoking the 1686 act in its entirety, because its conditions un-canonically have never been met (I must admit that now the MP has lately produced evidence to the contrary), by receiving the “ekkliton” appeal of the anathematized and schismatics thus restoring Orthodox unity in Ukraine, by restoring its Stavropegia in Kyiv, and by returning again the Kyivan Metropolia under the omophorion of the Ecumenical Patriarch.

MS: How should this problem be solved, considering that returning to history does not help too much in this situation?

PV: If by this you – and especially those following the MP logic – mean abandoning the ages-old canonical tradition that was established by the canons of the Ecumenical Councils, proposing a church unity without a Protos, without a primacy of honour and service but with certain prerogatives, theologically a practice followed at all levels of Church life (parish, diocese, autocephalous church, except the universal one?), allow me to have a different view. I am not saying that we must slavishly follow the holy canons with no contextualization of their content, but to keep our canonical tradition faithfully but dynamically interpreted. Otherwise there is a danger to fall into a protestant-style confederation of independent Orthodox Churches, a situation almost inevitable with the alternative proposal. If that happens, we can no longer speak of the “one, holy, catholic and apostolic church” we confess in our Church, but of something alien to Christian and authentic Orthodox ecclesiology. Unfortunately, for many centuries after the Great Schism we have unconsciously developed a “negative” Orthodox identity: we are not what our tradition has left us as legacy, but what the others, mainly the Catholics, are not. In other words, without a primacy, a visible expression of the Church’s unity, accompanied of course by synodality.