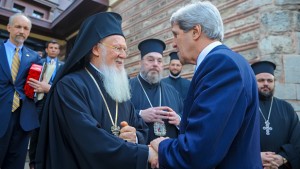 The Order of Saint Andrew expresses grave concern and outrage at the recently uncovered plot to assassinate His All-Holiness Ecumenical Patriarch Bartholomew on May 29th–the 560th anniversary of the fall of Constantinople.

The personal safety and security concerns of His All-Holiness have been conveyed to the highest levels of the U.S. Government, including the White House, State Department and the U.S. Ambassador to Turkey, Francis J. Ricciardone.

Read this article on Reuters »

Turkey is investigating an alleged plot to assassinate Ecumenical Patriarch Bartholomew, spiritual leader of the world’s Orthodox Christians, and has stepped up security around the patriarchate in Istanbul, his spokesman said on Friday.

Spokesman Dositheos Anagnostopoulos said the patriarch had not received any direct threats but had learned of the alleged plot from Turkish media, which was later confirmed to the patriarchate by Turkish police.

“Later in the day, police informed the patriarchate of a possible threat and dispatched additional police officers,” Anagnostopoulos said.

Turkish broadcaster NTV said one man had been arrested in relation to the alleged plot, after state prosecutors in central Kayseri province received an anonymous letter saying there was a plan to assassinate Bartholomew on May 29, the anniversary of the Ottoman conquest of present-day Istanbul.

It said police were still searching for two men in relation to the alleged plot.

The Ankara chief public prosecutor’s office, which local media said is leading the investigation, could not be immediately reached for comment.

There has been at least one previous assassination plot against Bartholomew in recent years but the patriarchate sought to play down Friday’s reports.

“The patriarch is not taking this too seriously. He doesn’t believe there is a serious threat,” Anagnostopoulos said.

Known often by his full title Patriarch Bartholomew I of Constantinople, the historical name for Istanbul, he is the spiritual head of worldwide Orthodoxy, which split from the Roman Catholic Church in 1054.

Previous attacks on Christians have raised concerns about the safety of religious minorities in Muslim Turkey, which has around 100,000 Christians out of a total population of 76 million.

In 2010, a leading Catholic bishop was stabbed to death at his home in southern Turkey by his driver and in 2006, a Roman Catholic priest was murdered in the Black Sea town of Trabzon by a teenager with suspected links to ultra-nationalists.

In 2007, three members of a Bible publishing company, one of whom was a German citizen, were tortured and killed in Malatya in central Turkey.