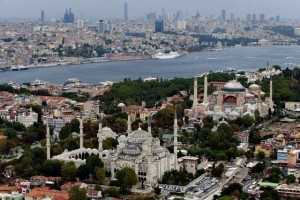 DALLAS February 5, 2013 – In a surpise move, a commission of the Turkish Parliament last week accepted a petition from a Turkish citizen to reopen the Hagia Sophia as a place of worship for Muslims.

The center of Orthodox worship in the Eastern Roman Empire for over a thousand years (360 – 1453), the Church of the Holy Wisdom, more commonly known by its Greek name Hagia Sophia, has been a museum since 1935 and draws millions of visitors every year. After the conquest of Constantinople by the Turks in 1453, it became the first imperial mosque of the Ottoman Empire, and the call to prayer sounded from its minarets for almost 500 years.

The decision by Atatürk’s government to designate the building as a museum was an obvious attempt at reconciliation between the Turks and Greeks, who had been feuding for centuries.

The fact that the Turkish Parliament would consider opening the building for use as a mosque may reopen old wounds. The former church still prominently features six gigantic green medallions with the names of Allah, the Prophet, and Islam’s first four caliphs.

Conservative groups in Turkey, such as the Anatolia Youth Association, have been conducting campaigns to have the structure rededicated to Islamic worship. It’s conversion to a museum has long been viewed as a betrayal of the Ottoman Empire by Muslim groups.

One such group conducted a survey in the Turkish city of Kocaeli, just east of Istanbul, and found that 97.8% of the respondents supported reopening the Hagia Sophia as a mosque. This survey was also submitted to Parliament. In the following days, the Parliamentary Petition Commission received 15 more petitions asking that the structure be redesignated as a mosque.

The decision by the parliamentary commission caused an explosion on social media like Twitter. A twitter account called Islamic Brotherhood tweeted, “We want to do our prayers in the Hagia Sophia!” The tweet had a link to a picture of the building and a caption that read, “We don’t need a ticket to enter; our ritual washing should be enough to get us in.”

Another person said, “Oh Hagia Sophia, how You must miss the call to prayer and we miss performing our prayers inside You.”

These calls for the former church to be reopened as a mosque echo statements made last year by Bulent Arinc, the 22nd House Speaker of the Turkish Parliament, about a church in Trabzon that, like the Hagia Sophia, had served as a mosque before being converted to a museum.

“The Hagia Sophia Mosque in Trabzon has, unfortunately and for no good reason, been used as a museum until now. This sort of thing won’t happen as long as we are in power. Mosques are for worshipping Allah. No law can ever change its original purpose. If Allah is willing, we will all together reopen the Trabzon Hagia Sophia as soon as possible. If Allah is willing, we will go to Trabzon. We will line up for prayer and say ‘Allahu Ekber’ in the mosque of our ancestors.”

The neo-Ottoman aspriations of Islamist politicans like Arınç are no secret. Statements like the preceeding are standard fare in Turkey’s cultural war.

Luke Montgomery, author of A Deceit To Die For, lived in the Middle East for over a decade. He holds an MA in Linguistics, speaks fluent Turkish and writes on foreign policy, religion and culture. You can follow his work at www.lukemontgomery.net, or find him on Twitter at @LookingFor_Luke and on Facebook.