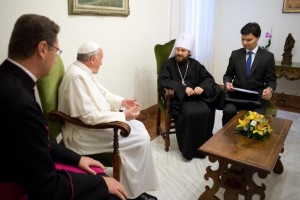 (MENAFN – AFP) The crisis in Ukraine is undermining reconciliation efforts between the Vatican and the Russian Orthodox Church and has shown up Pope Francis’s inability to make his peace message heard in the conflict-torn country, analysts said.

Francis has called for dialogue in Ukraine – as he does for conflicts around the world – but the Vatican has kept a distance and did not take a position on Russia’s annexation of Crimea in March or subsequent hostilities in the east of the country.

The pope was faced with an impossible task, with the Russian Orthodox Church regularly accusing Ukrainian Greek Catholics allied with the Vatican of supporting far-right nationalists and sabotaging Rome-Moscow relations.

Hilarion accused Greek Catholics and the independent Ukrainian Orthodox Church of trying to “divide” the Russian Orthodox Church, adding ominously: “This harks back to a time when Catholic and Orthodox considered themselves adversaries.”

The Russian Orthodox faith remains the largest church in Ukraine, followed by the Ukrainian Orthodox Church led by Patriarch Filaret in Kiev, which was created in 1992 following the collapse of the Soviet Union.

Greek Catholics, who are concentrated in more anti-Russian western Ukraine, have the third largest number of believers.

Many of them are angry about what they feel has been a lack of support from the Vatican and excessive deference towards Russian President Vladimir Putin.

Even as the conflict has degenerated, the Vatican has made important overtures to Moscow including an invitation from Pope Francis to Russian Orthodox Patriarch Kirill to hold the first ever meeting between a Catholic and a Russian Orthodox leader.

But the conflict in Ukraine has made the prospect of the meeting remote.

“At the beginning of February, the possibility of a meeting seemed to be plausible. The Ukraine crisis has made it impossible,” Yves Hamant, a French expert on Russia and Orthodoxy, told AFP.

“Kirill saw himself as a bit of a pope of the Orthodox world. He found in (former pope) Benedict XVI an ideal partner for a strategic alliance against secularism,” he said.

“For him, the loss of Ukraine is a tragedy,” he said.

“It is a loss of status in Orthodoxy, the myth of a Russian world bringing together the Orthodox communities from Russia, Ukraine and Belarus,” he said.

Catholic leaders meanwhile have voiced their frustration in the face of Russian criticism.

“It is not true that the Greek Catholic Church is responsible for the suffering of the Ukrainian people,” a Catholic prelate in Rome told AFP on condition of anonymity.

“We can’t do anything against lies and bad faith,” he said.

Many Ukrainians of all denominations, including some affiliated with the Russian Orthodox Church, supported the Maidan protests in Kiev that eventually ousted Ukraine’s pro-Moscow president Viktor Yanukovych in February.

Russia’s Profil magazine cited religious experts in Kiev as saying that two-thirds of Russian Orthodox clergy in Ukraine would support the current Ukrainian government, while around a third back Russia.

In Moscow meanwhile, the ties between the Russian state and a 130-million strong Orthodox church are stronger than ever.

In the Ukraine crisis, Kirill “cannot play the role of referee because he is too linked to Moscow”, Hamant said.

But there are signs too that the Russian Orthodox are playing a more constructive role, with their chief clergyman in Ukraine – interim metropolitan Onufriy calling on Friday for pro-Russian rebels to lay down arms.

The pick of a new permanent metropolitan for Ukraine could prove instrumental to peace and reconciliation efforts – both in Ukraine and between the Vatican and Russian Orthodoxy.