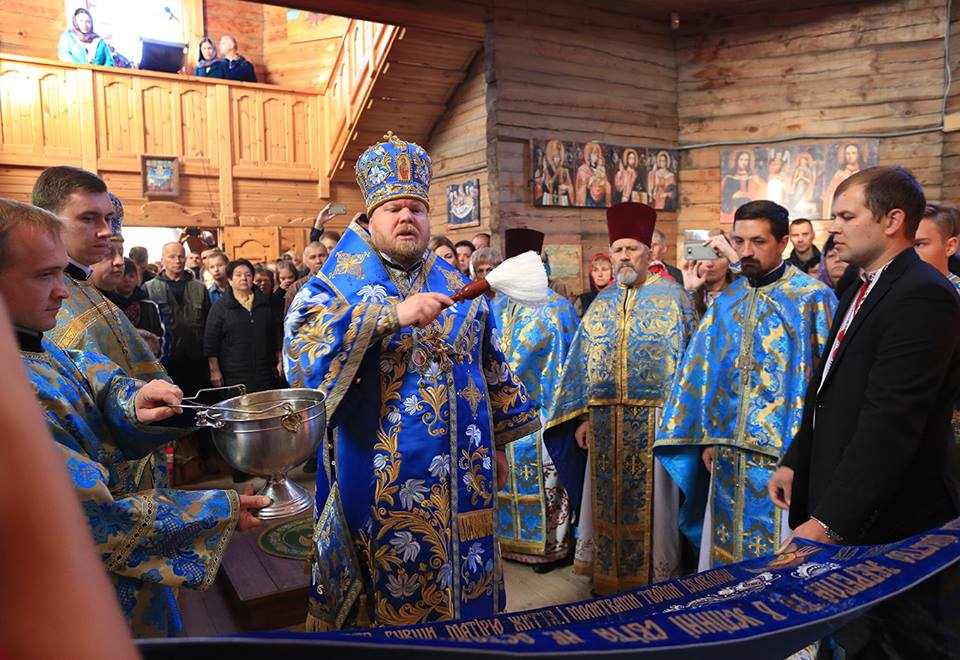 The Ukrainian nationalist-schismatic church wasted no time in distinguishing itself as the more “progressive” church in Ukraine, eschewing the conservative attitudes in the canonical Ukrainian Church.

In late December, the schismatic primate “Metropolitan” Epiphany Dumenko declared: “Of course, I am for starting reforms in the church, so there wouldn’t be conservatism, so we would depart from Russian tradition and so the church would be open and a spiritual guide for the Ukrainian people.”

Asked specifically about softening the position on the LGBT issues, Epiphany said: “This is a difficult issue that we should not raise at the beginning of our journey, because, you know how Ukrainian society perceives this question. Now we need to work on it, so Ukrainian society would accept it. It’s a long path. Of course we will discuss and seek for answers to these complex questions.”

The pro-gay Kyiv Pride organization understood the significance of the creation of the Ukrainian nationalist church, tweeting out its congratulations, “remind[ing]everyone that love does no harm to others!”

And this same sense of “love” seems to be guiding the hierarchs and clergy of the Ukrainian schismatic church towards other liberalizing positions.

According to “Bishop” Photios of Zaporozhye and Melitopol, the “commandments of love” demand that the schismatic church celebrates funerals even for Catholics.

Speaking on air on Ukrainian television, Photios noted that it is very important to listen to the heart and act according to the commandments of love. “If someone was baptized in a church of another jurisdiction and dies, we will bury him. Even a Catholic,” the schismatic hierarch explained, adding that in such a case, the priest should first clarify why they have turned to the “Orthodox Church of Ukraine” (OCU) to bury a Catholic.

Conversely, His Eminence Metropolitan Luke of Zaporozhye and Melitopol of the canonical Ukrainian Church, who was also on the program, of course disagreed with this position, explaining that the priest should tell the family of the deceased Catholic that he cannot serve the funeral, but he can try to console them.

In the Orthodox Church’s understanding, true love cannot be separated from truth, and the boundaries of the Body of Christ cannot be transgressed. In fact, the funeral service is often considered a Sacrament, as in the writings of St. Dionysius the Areopagite and St. Theodore the Studite, for instance, and Orthodox Sacraments are only for Orthodox Christians.

In March of last year, criminal proceedings were launched against Fr. Evgeny Molchanov of the Zaporozhye Diocese of the canonical Church after he declined to serve the funeral for a young boy who had been baptized by the schismatic “Kiev Patriarchate.”

Fr. Evgeny’s stance was later explained by Archpriest Nikolai Danilevich, the Deputy Chairman of the Department for External Church Relations: ““The logic is simple: If there is a valid priesthood, that means the Sacraments celebrated by such priests are true. An invalid priesthood brings with it invalid sacraments. Clergy who go into schism, and especially those who received ‘ordination’ in schism, according to the First Canon of St. Basil the Great, ‘became laymen, and had no authority either to baptize or to ordain anyone, nor could they impart the grace of the Spirit to others, after they themselves had forfeited it.’”

The OCU has also expressed its willingness to install benches in its parishes and to lessen the expectation that women cover their heads in church. While these issues are relatively minor, they nevertheless represent a turn away from traditional Ukrainian comportment during the Divine services.

More substantially, Epiphany Dumenko declared in December that his group could switch to the New Calendar. “Even if we speak about the celebration of the Nativity of Christ, about the calendar—if we change from January 7 to December 25, the Ukrainian people will not accept this,” Epiphany said, adding: “We need to explain and prove it. Once people realize that its’ not dogma, that it’s just a date, then it will be possible to put forth and make decisions.”