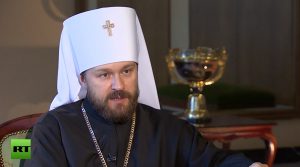 The landmark meeting of the heads of all Orthodox Christian churches could be postponed as five out of 14 churches have pulled out. The head of external relations at the Russian Orthodox Church, Metropolitan Hilarion, explains the situation to RT.

After decades of preparation, the historic Pan-Orthodox Council was scheduled for June 16-25 in Crete, but several churches have either refused to attend, or called for the event to be postponed, including the Antiochian, Bulgarian, Georgian and finally Russian.

“There are many problems among various Orthodox Churches… These disagreements might seem small but, for historical churches, these are important issues,” the chairman of the department of the external church relations and the permanent member of the Holy Synod of the Moscow Patriarchy, Hilarion, told RT’s Maria Finoshina.

Hilarion said he does not see current political tension in the world directly affecting the churches’ relations, which more often than not depend on ecclesial issues, although adding that it might affect some decision-making.

“One church after another declares that it is not participating, which means there will be no consensus, which means it is no longer a Pan-Orthodox Council. And we believe that the only way out of this difficult situation is to postpone the council,” Hilarion said.

He explained that the preparations for the event, which started in 1961, have focused on consensus, but with some of the 14 churches still remaining at odds over a number of issues, some “mistakes” still need to be fixed, and some of the churches’ concerns properly addressed.

“Unity is not something that can be imposed upon churches,” Hilarion said, adding that “conciliation is one of the essential marks of the church but it cannot be simply imposed by any kind of administrative decision.”

The Russian Orthodox Church remains committed to holding the Pan-Orthodox Council, he stressed.

“I do not see the current situation as catastrophic. I believe it is one of the stages of preparation for the Pan-Orthodox Council. It’s not a fault that this preparation was as smooth as we wanted it to be. And we do not believe that the whole idea of the council should be abandoned. We simply believe that it should be better prepared,” Hilarion said.