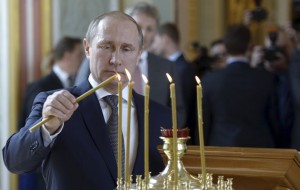 In December, Putin claimed that Crimea for Russians was “like the Temple Mount in Jerusalem for followers of Islam and Judaism,” given that Prince Vladimir had been baptised there. File photo
Image by: RIA NOVOSTI / REUTERS

Russian President Vladimir Putin on Tuesday marked 1,000 years since the death of Prince Vladimir, the Orthodox saint credited with bringing Christianity to the country in the Middle Ages.

“By stopping strife, crushing internal enemies, Prince Vladimir initiated the formation of a united Russian nation, in fact paving the way for the construction of a strong, centralised Russian state,” Putin said at ceremony in the Kremlin alongside the head of Russia’s Orthodox church.

By converting Kievan Rus — the forerunner of modern Russia, Ukraine and Belarus — the medieval prince expressed the “population’s yearning for high ideals of good, truth and equality, to fraternal unity and solidarity with the whole world,” Putin said.

Russia and Ukraine, which both have Orthodox traditions, have been locked in a bitter feud over Moscow’s annexation of Crimea last March and its support for a pro-Russian insurgency.

The head of the Russian Orthodox Church, Patriarch Kirill, said at the ceremony that the conflict in Ukraine highlighted the need to strengthen the unity preached by Prince Vladimir.

“Against the backdrop of tragic events in the world, we acutely feel the need to reinforce pan-Orthodox unity, solidarity and mutual support,” Patriarch Kirill said.

In December, Putin claimed that Crimea for Russians was “like the Temple Mount in Jerusalem for followers of Islam and Judaism,” given that Prince Vladimir had been baptised there.

Prince Vladimir recently sparked controversy among Muscovites, who objected to plans to erect a 24-metre (80-foot) sculpture of the religious figure on a hill overlooking the city.

Municipal authorities are now scrambling to find another location for the monument, whose unveiling is scheduled for November.

The millennial anniversary was also celebrated in Ukraine, where more some 6,500 people have died in the armed conflict raging in the country’s east.

“It is the will of God who shows us how to defend the Homeland. I believe that the Lord is with us, with Ukraine.”