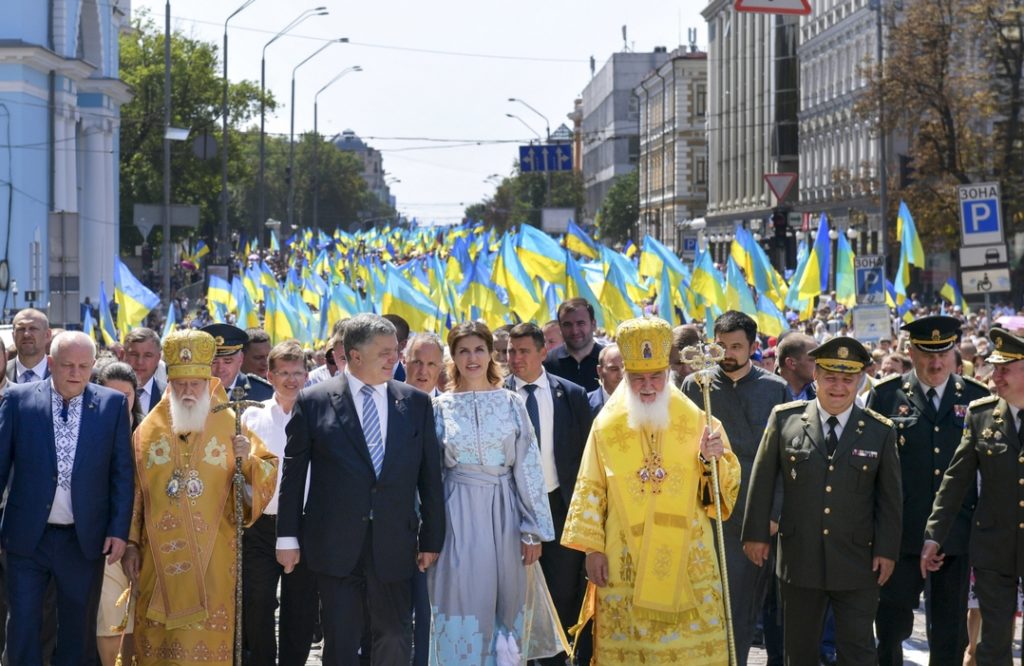 Head of the Ukrainian Orthodox Church of the Kyiv Patriarchate Filaret, Ukrainian President Petro Poroshenko, his wife, Maryna Poroshenko (C) take part in a march during religious processions marking the 1030th anniversary of the Day of Baptism of Kyivan Rus,on July 28 in Kyiv.
Photo by Mykola Lazarenko

It’s no exaggeration to write that the granting of autocephaly from the Russian Orthodox Church to Ukraine’s millions of Orthodox believers is as significant as the disintegration of the USSR for Ukraine. Granting Ukraine’s Orthodox Church a Tomos is the last step Ukraine needs to take in order to become truly independent.

Why have the stars aligned now?

Since Russia’s annexation of Crimea and military aggression in eastern Ukraine, the Russian Orthodox Church and UOC have been unable to maintain neutrality. Russian Orthodox Church clergy have blessed Russian nationalists traveling to the Donbas. Some UOC clergy have refused to serve at funerals of Ukrainian soldiers and UOC Metropolitan Onufry (Berezovsky) and senior clergy refused to stand in parliament in honor of slain Ukrainian soldiers.

There’s another factor working in favor of independence now. As the former ideological secretary of the atheist Communist Party in Ukraine, President Leonid Kravchuk had no legitimacy on church-state matters, while President Viktor Yushchenko’s strongly supported the UOC-KP and was perceived as anti-Russian. President Leonid Kuchma was even-handed, while Yanukovych openly backed the Russian Orthodox Church.

President Petro Poroshenko is a deacon in the UOC and Constantinople does not view him as “anti-Russian.” Importantly, due to his influence, senior UOC clergy have supported the UOC-KP and smaller Ukrainian Autocephalous Orthodox Church in seeking autocephaly. The Ukrainian parliament strongly backs independence. Poroshenko adopted a legalistic approach to seeking autocephaly that left the Russian Orthodox Church with little room to maneuver.

Russia also overplayed its hand in the Balkans and this also contributed. Russia’s involvement in an attempted violent coup in Montenegro to thwart it from joining NATO was followed by the expulsion of Russian intelligence officers from Greece attempting to derail the country’s rapprochement with Macedonia (permitting the latter to join NATO and EU). 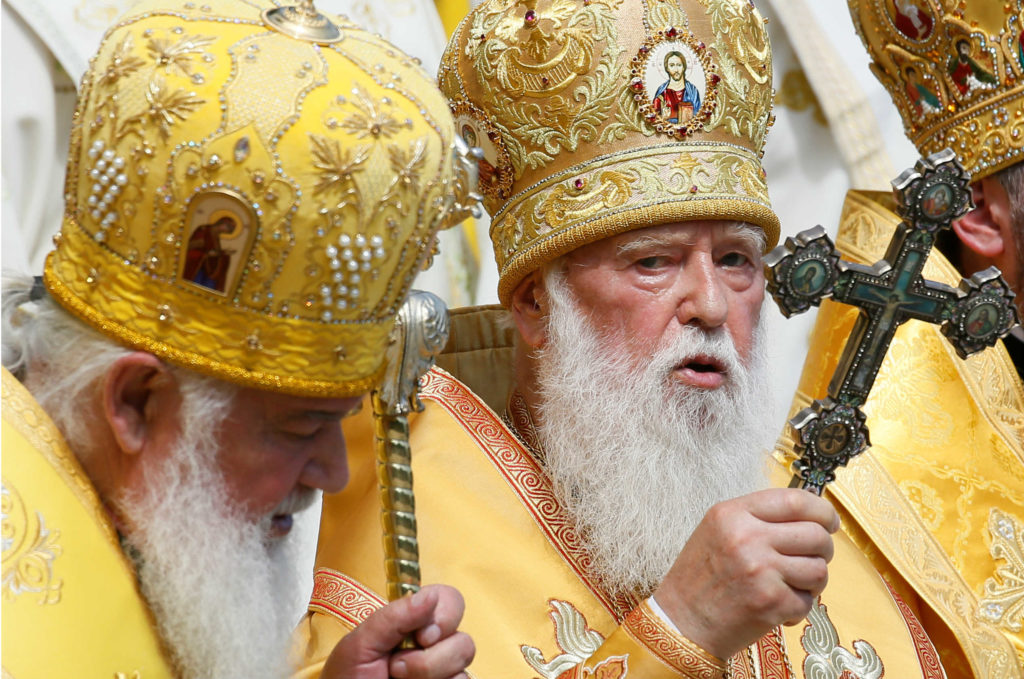 Metropolitan Filaret, head of the Ukrainian Orthodox Church of the Kyiv Patriarchate, takes part in a ceremony marking the 1030th anniversary of the Christianisation of the country, which was then known as Kyivan Rus’, in Kyiv, Ukraine July 28, 2018. REUTERS/Valentyn Ogirenko

The decision to grant Ukraine autocephaly should be understood in three ways:

First, size and power. Greece and the Constantinople Patriarch have had enough of Russia’s interference and see the emergence of an autocephalous Ukrainian Orthodox Church as a way of cutting it down to size. In the USSR, two-thirds of Russian Orthodox Church parishes were in Soviet Ukraine. Today, despite Ukraine having a third of Russia’s population, both countries have roughly the same number of Orthodox parishes (14,000).

In the USSR, a majority of Russian Orthodox Church parishes were in western and central Ukraine, and that remains the case today. It was always therefore wrong to describe Ukraine divided between a “Catholic West” and “Orthodox East.” There are far fewer Orthodox churches in the Donbas.

There will not be a “civil war” over religion, and most UOC faithful will peacefully join Ukraine’s new autocephalous church.

Second, national identity. The USSR and Russian Federation have used the adoption of Orthodoxy in 988 to lay claim to Kyiv Rus as the “first Russian state.” This falsehood is sometimes repeated by Western journalists and nearly always in Western “histories of Russia.” Russian and Western historiography ignores the existence of Ukrainians until many centuries later and forever links them to Russians and Belarusians.

Russians believe, and Russian President Vladimir Putin constantly reiterates, Kyiv Rus gave birth to the three eastern Slavs and their desire in the Tsarist, Soviet, and contemporary eras was always to remain in union. Nationalists opposed to this idea were working for various Western empires, governments, and intelligence agencies.

In 2007, the Russkiy Mir (Russian World) was meant to unite Belarus, Russia, and Ukraine around the Russian Orthodox Church and become the core of the Eurasian Economic Union. Putin and Russian nationalists understand the word Russkiy to include the three branches of the “Russian” people (Belarussians, Russians, and Ukrainians) and regard Ukrainians as “Little Russians.” Ukrainians and Russians are “one people”’ and, as Putin said to the NATO-Russia Council in 2008, Ukraine is an artificial state.

Ukraine rejects Russkiy Mir ideology and support for membership in the Eurasian Economic Union has plummeted. Autocephaly will reinforce growth in Ukrainian patriotism, support national integration, and spur a final divorce from Russia.

Taras Kuzio is a non-resident fellow at the Center for Transatlantic Relations at Johns Hopkins-SAIS, and is the author of “Putin’s War Against Ukraine” and co-author of “The Sources of Russia’s Great Power Politics: Ukraine and the Challenge to the European Order.”