[ditty_news_ticker id="27897"] Why Is Poverty-Stricken Romania Building So Many Churches? 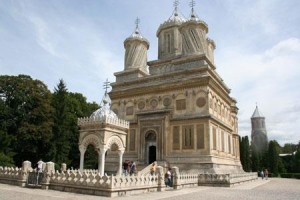 The Eastern European nation of Romania, one of the poorest states in the European Union, takes its religious faith very seriously. An overwhelmingly Eastern Orthodox nation (which claims at least 86 percent of the population as adherents), Romania has undertaken an aggressive campaign to build an extraordinary number of churches across the country, regardless of expense.

According to a BBC report, about 10 new churches are built every month in the country – or one every three days — with a huge cathedral currently under construction in the center of the capital city of Bucharest. When it is finished, the 125-meter (410-foot) Cathedral for the People’s Salvation is expected to become the tallest house of worship in southeastern Europe (larger than former Communist dictator Nicolae Ceausescu’s massive Palace of the People, which stands next to it). The rapid expansion of churches reflects the resurgence of the Orthodox Church in the country’s political and cultural life, almost 25 years after the fall of the repressive Ceaușescu regime.

However, some in Romania question the wisdom of spending enormous funds from the public treasury to construct so many churches in a nation where one-fifth of the population lives below the poverty line and almost one-fourth of people under 25 are jobless. Moreover, earlier this year, the Social Democratic government of Prime Minister Victor Ponta unveiled a new series of austerity measures, on top of four years of aggressive spending cuts, wage and pension reductions and increasing poverty – all in exchange for a €20 billion ($26.6 billion) loan from the International Monetary Fund and the European Union in 2009.

But apparently the Romanian government has not reduced the money it gives to the Orthodox Church. According to reports, state officials hand out more than 100 million euros annually to the church to pay for priest salaries and other expenses, including the renovation of existing church properties and the construction of new churches. Churches also receive funds from local government councils, state-controlled companies and the parishioners themselves. Remus Cernea, head of the country’s Green Party and an MP, complained to the BBC: “In Romania we have a big problem between church and state. My view is that if the church wants to build something it’s OK until the money for the building of this church is the money of the people, of the state — public funds.”

Cernea contends that the church is too closely linked to senior government officials. “In many cases politicians give public funds to churches and in exchange the priests support them in electoral campaigns,” he said. “Often you see the construction companies who build the churches owned by people who are very close to the politicians. So it’s a kind of circle of money.”

In addition, the proliferation of churches is particularly perplexing in light of the country’s negative population growth rate (an annual decline of 0.2 percent, said the World Bank).

But perhaps Romania’s recent history explains this frenzy in church-building. Romania’s church hierarchy had a torturous relationship with the Communists. While Ceausescu’s Marxist regime damaged and destroyed many churches, many clerics went along with the state in order to avoid purges. In any case, since 1989, after the fall of the Communist regime, the Orthodox Church has enjoyed a huge recovery.

Victor Opaschi, Romania’s minister of religious affairs, explained that the government was obligated to return the church to prominence. “The Communists took from the church and it lost nearly all its property,” he said. “Now the state is trying to compensate for this by giving back a small proportion of what it has taken.”

Nowhere in Romania is the obsession with churches greater than in the northeastern town of Târgu Ocna. According to Actmedia, a Romanian business news agency, this town of about 14,000 people boasts some 27 places of worship (in another words, 19.3 churches per every 10,000 residents).  In comparison, the southern U.S., the so-called Bible Belt, has about 15.4 churches for every 10,000 residents, according to Associated Press. Most of the holy sites in Targu Ocna are more than 100 years old, with some — including St. Paraschiva Church and Raducanu Fortified Church — well over 200 years old.

“The high number of worship sites in the town reflects the intense public life and a series of historical events that took place in this town, which has seen an outstanding cultural effervescence for over three centuries,” Mayor Stefan Silochi told AGERPRES agency.