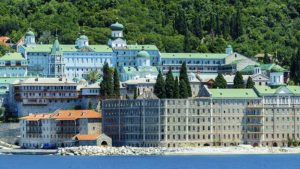 If you want to visit Mount Athos the first step is to submit a copy of your passport to the Mount Athos Pilgrims’ Bureau. Each day, 100 Orthodox and 10 non-Orthodox male pilgrims are admitted for a three-night stay in one of the peninsula’s 20 monasteries.

Women will not be granted a permit and must stay behind as their male friends board the ferry at one of the two closest ports.

Mount Athos has barred women for more than 1,000 years – they are not allowed within 500m of the coast.

According to Dr Graham Speake, author of Mount Athos: Renewal in Paradise, a 10th Century charter states that female animals are excluded but says nothing about women because “everyone knew that women were not allowed in men’s monasteries”.

This was the simplest way, he says, to ensure celibacy. The thing that makes Athos different from other monasteries, he says, is that the whole peninsula “is regarded as one huge monastery”.

But there is also another reason for banning women, connected with Orthodox tradition.

“One of the traditions is that the Virgin Mary was blown off course when she was trying to sail to Cyprus and landed on Mount Athos. And she liked it so much that she prayed to her son that she should be given it as her own and he agreed,” says Speake. “It’s still called ‘the garden of the mother of God’, dedicated to her glory, and she alone represents her sex on Mount Athos.”

This applies to both humans and domestic animals, except for cats.

“There are a lot of cats around and it’s probably a quite a good thing that there are because they are good mousers. They turn a blind eye, as it were, to the fact that there are female cats,” says Speake.

This means that dairy products and eggs have to be brought in from outside.

“They eat very little dairy. There is a bit of cheese… they do quite like cheese in salads,” says Speake.

“They have eggs at Easter – hens’ eggs which they paint red. That is absolutely standard. Again they have to import them as there are no chickens on the mountain.”

An exception has to be made for wild animals, which would be near-impossible to control. 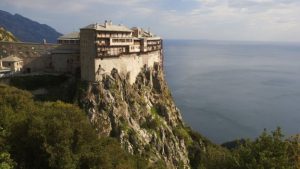 With boys, the policy has become more flexible over the years.

“The rule is and always has been that men should be capable of growing a beard if they were going to go to Athos, and there was a prohibition against eunuchs and boys in the Byzantine period,” says Speake. The fear was that a woman could pretend to be a boy or a eunuch in order to sneak in.

“What happens nowadays is that boys frequently come if they’re accompanied by an adult – usually their father – and I’ve seen boys as young as ten. And the monks are very indulgent towards them. They actually like having boys around.

“So the answer is that yes, boys do come occasionally, but invariably when accompanied by an adult.”

Women have visited the peninsula, however, despite the ban.

During the Greek Civil War, between 1946 and 1949, Mount Athos granted sanctuary to peasants’ flocks, and women and girls were part of a raiding party which entered Athos in pursuit of the animals.

And in 1953, the three-day visit of a Greek woman, Maria Poimenidou – who dressed as a man – caused Greece to pass a law which prohibits women from entering Athos, with a maximum penalty of 12 months’ imprisonment for those who break it.

More recently, in May 2008, four Moldovan women were dropped there by Ukrainian people smugglers. Police briefly detained them, but one officer said “they were forgiven” by the monks.

This is President Putin’s second visit to the Russian Orthodox monastery of Saint Panteleimon on Mount Athos.

When he first visited in 2005 the majority of pilgrims were Greek. Now, Speake says, as many as half of the 40,000 yearly visitors are Russian, and the Russian monastery has room for 500 guests.