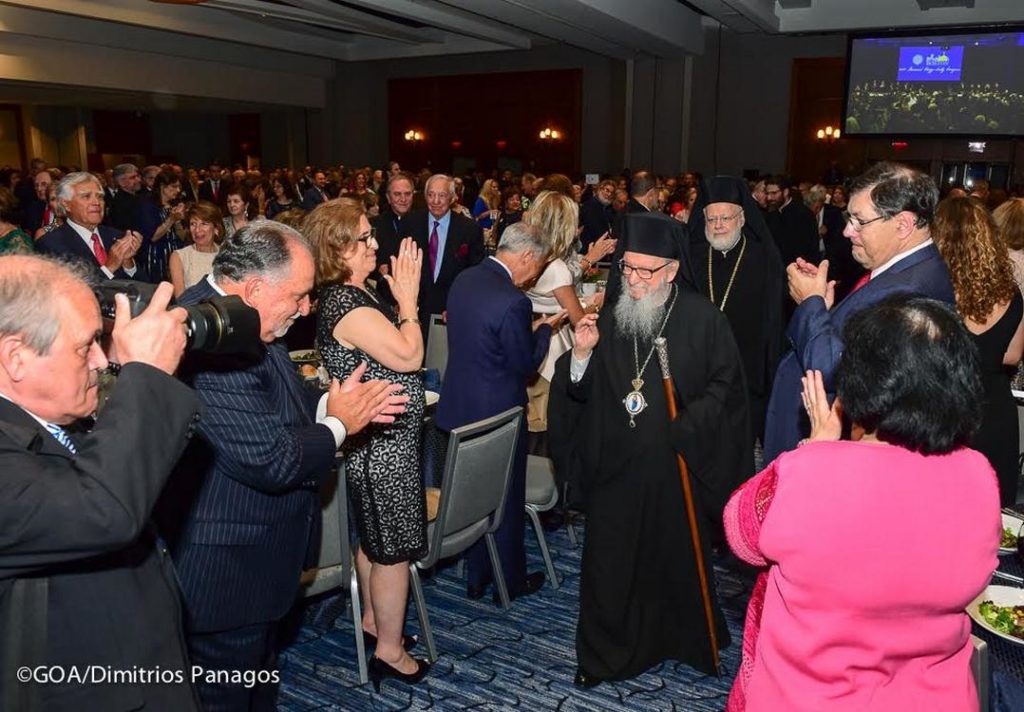 BOSTON – The 44th Biennial Clergy Laity Congress of the Greek Orthodox Archdiocese of America concluded last night, July 5, 2018 with a Grand Banquet at the Boston Marriott Copley Place Hotel and attended by more than 1,200 people. The festive banquet followed a full day of deliberations in the setting of the Plenary Session of the Congress.Stavros Papagermanos/[email protected]: GOA/Dimitrios Panagos

BOSTON – The 44th Biennial Clergy Laity Congress of the Greek Orthodox Archdiocese of America concluded last night, July 5, 2018 with a Grand Banquet at the Boston Marriott Copley Place Hotel and attended by more than 1,200 people. The festive banquet followed a full day of deliberations in the setting of the Plenary Session of the Congress.

His Eminence Archbishop Demetrios Geron of America offered the invocation and the National Anthems were sung by mezzo-soprano Collen Palmer. Co-Chairs of the Congress Michael Sophocles and Peter Bassett made the presentations and offered greetings. Greek American journalist and former News Anchor Mike Nikitas, served as the Master of Ceremonies. Greetings were offered by the Chairman of Leadership 100 Argyris Vassiliou, Congress Honorary Chairman Arthur Anton, National Philoptochos President Maria Logus and Consul General of Greece in Boston Stratos Efthymiou.

The host hierarch His Eminence Metropolitan Methodios offered inspiring remarks and expressed his gratitude personally to all the members of the host committee and the volunteers.

Metropolitan Apostolos admonished the attendees about the dangers of evil, lies and scandals and said: “The enemy of truth and our salvation works deviously day and night. We ought to oppose his machinations with unshakeable Faith to the Omnipotent Holy Triune God of Truth. Faith working through love per Apostle Paul (Gal. 5:6); and not only through love but also through patience and discernment and humility but mostly God-loving unity.”

Finally, His Eminence Archbishop Demetrios of America recognized and praised the hard work of the host committee, the volunteers and their spiritual leader Metropolitan Methodios. The Archbishop expressed gratitude to the His All Holiness Ecumenical Patriarch Bartholomew for his demonstrated leadership, love and care. He also said that the Church is universal and diachronic and the Clergy Laity Congress was not only an opportunity to connect amongst ourselves and discuss issues of concern but hopefully and most importantly an opportunity to connect with God. His Eminence returned to the theme of the Clergy Laity and recounted the story of the father who was pleading to Christ for the healing of his son (Mark 9:23) and the response of the Lord: “If you can believe, all things are possible to him who believes.” Archbishop Demetrios concluded his closing remarks offering as admonishment and spiritual guidance the reading of a passage from St Paul’s letter to the Romans (35, 38-39): “Who shall separate us from the love of Christ? Shalltribulation, or distress, or persecution, or famine, or nakedness, or peril, or sword? For I am persuaded that neither death nor life, nor angels nor principalities nor powers, nor things present nor things to come, 39 nor height nor depth, nor any other created thing, shall be able to separate us from the love of God which is in Christ Jesus our Lord.”

The work of the Plenary

The Plenary session began at 10 in the morning and ended well after 4 p.m. Vice-President of the Archdiocesan Council George Tsandikos set a positive tone in his introductory remarks and expressed the belief of the Executive Committee in the theme of the 44th Clergy Laity Congress that all things are possible to those who believe.

The treasurer of the Archdiocesan Council, Michael Psaros made a 50-minute long presentation, an overarching view of the finances of the Archdioceseand the efforts of the Executive to correct the course and restore trust. Addressing some media reports he said, “stop the lies and join us build the Church,” and a little later addressing unfounded misinformation in the Press said: “the lies about the parishes not supporting the Archdiocese have to stop.”

The Plenary discussed at length the Archdiocese budget for 2019 and 2020 amendments were offered and modifications were voted requesting additional line items for funding the pension plan and HCHC. Mr. Psaros expressed his dismay for an unbalanced budget. At the end the budget was approved with the stipulation the Archdiocesan Council will have to make the necessary adjustments to bring it into balance.

The plenary also heard and approved a presentation by the Administration Committee and several amendments to the Archdiocese and Metropolis regulations were approved. The Youth Protection Manual was also presented to the delegates and approved. Also approved were several resolutions, including resolutions of thanks, which will be compiled and published in the Archdiocese website. Similarly, due to severe time restrictions, the National Philoptochos, the Archons, Leadership 100, and the Archdiocesan Presbyters Council made short presentations.