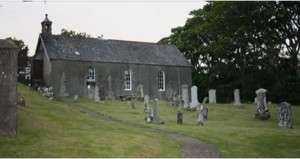 Father Seraphim Aldea is so committed to building the first Orthodox monastery in the Scottish isles in more than a millennium that he did something no monk searching for solitude would ever, ever do.

“I learned how to use that dreadful Facebook thing,” he said. The Romanian monk has already been handed an abandoned Church of Scotland sanctuary on Mull Island. While Kilninian was built in 1755, it appears in 1561 records as a site associated with the great Monastery of St. Columba on Iona. Thus, this property may have been linked to monasticism as early as the seventh century.

But there is a problem. The Atlantic coast of Scotland, including the 150 main Hebrides islands, is now a designated Area of Outstanding Natural Beauty, which means major restrictions for anyone wanting to build or restore anything.

Normally, starting a monastery means obtaining land and then gathering some monks to move there, noted Father Seraphim during a fundraising swing through the Baltimore area. The monks build their facility and then it’s dedicated. But that isn’t how things work in Great Britain these days. Before the 34-year-old monk can build a single monastic cell, he has to buy land that can provide running water and a sewage system.

“I need your help … to build that toilet,” he said, drawing laughter from his audience. “It sounds stupid, but that’s all there is. We can build the first monastery in the Hebrides in over a millennium if I can build a toilet.”

Scotland and Ireland have for centuries — well before the 1054 schism between Rome and the Orthodox East — been famous for the work of St. Columba, St. Brigid, St. Brendan and other great Celtic monastics. Pilgrims continue to flock to these lands to visit ruins on these sacred sites.

It is customary for the boatloads of pilgrims headed to Iona to stop on Mull Island, noted Father Seraphim. Thus, the goal is to build a new monastery (mullmonastery.com) out of local stone for those who want to stop, rest and pray, or even to spend several days as visitors. The chapel will remain dedicated to saints Ninian and Cuthbert, while the monastery will house a community of nuns, since it is “likely that a pack of bearded foreign men” would be harder for “the locals to trust,” he said.

A group of Catholics has already made a similar attempt, but eventually gave up and donated the sanctuary to the Orthodox — under the condition that Kilninian would become part of a monastic community.

Father Seraphim noted that he knew nothing about the great Celtic monastics when he began doing graduate work in England, concluding with a doctorate in history at the University of Durham. Then his bishop asked him to consider working near London, or perhaps to continue his scholarly research in Paris.

However, Father Seraphim told his superior that he “felt called to solitude.” When told about the abandoned sanctuary in the Hebrides, the young monk asked: “Do you know someone mad enough to be willing to go and live there?”

If he is able to purchase five acres providing clean water and a septic system, Father Seraphim plans to move to Kilninian this coming fall. He said he is convinced, after preliminary research, that there are still believers in England who feel called to monasticism. In addition to several “semi-monastic houses,” there appear to be a number of hermits in various parts of the land who are dedicated to prayer and worship.

“This vocation is there, it still pulsates in these islands,” he said. “What people are lacking is tradition. They need examples — not one, not two, but several real monasteries — so that they may have somewhere to learn from without having to leave their country.”

“England and Scotland and Ireland are the lands of your ancestors,” he said. “It sounds strange to say it, but the truth is that whatever happens in Western Europe today will take place everywhere in the world in about 50 years. If we let those countries go completely … it is going to affect us all.”

To find out more about the monastery & how to help, go to: http://mullmonastery.com/donate/.