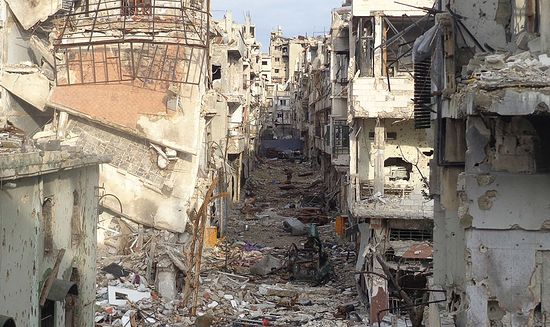 He is Syrian, he is Orthodox Christian and he just finished his studies in Romania. S.M. lives through the war in Syria as an eye-witness and views it completely different than it is presented to us in Romania. (The Syrian asked me not to give his name; I guarantee that the following interview is an honest one, that S.M. is not forced by the Syrian authorities to talk nice about Bashar Al Assad)

How does a Christian living in Syria view the current situation from Syria?

I am a Syrian who studied in Romania. I just finished my studies and I returned to my country. The situation is very sad, because few years ago Syria was one of the best countries in the world (in 2009 it was the fourth most peaceful in the world and in 2010 it was the eighth tourist attraction in the world) and now the situation has changed and in 2012 Syria was among the ten most miserable countries in the world. The sad and very rapid change was a shock not only for me but for all Syrians throughout the world. Personally in these past couple of years I was continuously worried for my family as they were in danger and I, being in Romania, couldn’t do anything to help them. Now that I returned I understood what kind of danger the Syrians faced these two years and a half and, unfortunately, the situation is much worse than I imagined.

What I will tell may come as a shock to you, who are miss-informed by the Western mass-media. Yet, I have to tell you the truth. From the point of view of a Syrian Christian I can tell you that what is now happening in Syria is not a revolution. Why would we need a revolution when we go to schools, to universities, to hospitals for free? The prices used to be very low. We cannot say that life in Syria was perfect, but did that require a revolution? Not at all! The corruption in my country exists in any other country. At the same time the rights we had are beyond any comparison to the other Muslim countries. A Syrian Christian lived very well; he had all the rights a Muslim had. I never felt that I was somehow obstructed or that I needed more freedom. As a Christian I had all the rights a Muslim had except that of becoming president. We even had more rights compared to some Christian or secularized countries. For instance, the clergy can wear their vestments in the public areas; they are even treated with respect, whereas in Turkey only the Ecumenical Patriarch can wear his cassock in the public areas. In Syria the churches are exempted from paying the utilities, a thing that doesn’t happen in Romania etc.

So there weren’t any protests? Were they made up?

When the so-called “revolution” started there were indeed few who went out in the streets to ask for a reform. And indeed our country needs a reform. But the West and the Arab countries, which did not like Syria’s political direction, used those peaceful protests to infiltrate some armed extremist Muslims and this is how the crisis began. Anyone who asks a Syrian will immediately find out that at the present Syria is full of foreign terrorists from 38 countries. Some of them are even from Europe, Australia, US, Great Britain, while the majority comes from the Arab countries and from Turkey. Fire arms from Israel, France, US and Great Britain were found in the hands of the terrorists. The official army for sure doesn’t use them. A lot of my friends that were killed, they were killed by foreigners, some of them didn’t even know how to speak Arab, and the ones that use Arab they in fact use a different dialect than the Syrian dialect, like Libya, Saudi Arabia, Egypt etc. My heart breaks every time I hear in the mass-media that the Syrian army kills civilians, or that president Bashar Al-Assad kills civilians whereas we, the Syrians, see with our own eyes who does the killing and who kills our soldiers. We see and we hear these lies and we cannot do anything. Why? Because the West, especially US, France and Great Britain, want you to believe what they say. They talk all the time in the name of the Syrians, but it didn’t occur to anyone to ask the Syrians how they themselves view the situation.

Well, then who did use the sarin gas, Al Assad’s army or the opposition?

First of all this expression “Al-Assad’s army” doesn’t belong to the language of the Syrians. In Syria there are three forces now: the national army of the country – not of the president, the Free Syrian Army, with very limited troops, composed of the Syrian rebels who made use of this crisis, and the third force is Al Qaeda. Anyone who says something else does not know anything about the Syrian crisis and is manipulated by the Western mass-media, which claim that the fight in Syria is between “Al-Assad’s army” and the ones who ask for freedom and democracy. When they used the sarin gas I was in Damascus, 3 kilometers away from the area. The ones who tell you that the country’s army used the sarin gas are the Western mass-media. Who would believe that the army would use the chemical weapons in the same day the investigators planned to arrive in Syria? It wouldn’t have been possible for the gas not to reach us who were 3 kilometers away from the spot. Pictures that the Western mass-media didn’t show you prove that the gas was injected in the bodies of the victims. Russia has evidence that the West doesn’t want you to hear. And yet, you didn’t hear anything about the next day chemical weapons attack on the country’s army because your, Western, mass-media did not want you to hear about it.

Why didn’t the UN inspectors who investigated the sarin gas attack did not produce a firm report?

It is very clear why. Because the UN and US and Europe want to directly accuse the country’s army but could not find any proof. And when they find proofs that accuse the Opposition they keep silent about it, because their goal is always to show to the world that the armed wing of the Syrian Opposition is honorable and fights for freedom and could not do such things. Yet, people should not forget about the American war against Iraq, how the accusation that Iraq had weapons of mass-destruction was the pretext to invade Iraq, and how they could find none of them afterwards. That is why they are afraid of repeating the same pretext. The Syrian Government declared several times: the chemical weapons, if they exist, will not be used in Syria.

You wouldn’t say that there are no Christian killed in Syria as we saw happening in Iran, would you?

The way you asked the question is a clear example of mass-media manipulation… Why did you give the example of Iran, while the Christians in Iran are not as persecuted as the ones in Saudi Arabia, Qatar, Egypt… etc. Why? Because these countries are friends with the Americans, that is why mass-media do not talk about the persecutions in those countries, and about the fact that the Christians in those countries do not have the freedom that Christians enjoy in Syria. Anyhow, Christians from Syria were never persecuted until the so-called revolution. Until 2010 Syria was a heaven for its Christians. It is only in Syria that the Christian holidays are official State holidays. The Christians in the public service are allowed to be late to work on Sundays in order to be able to attend the Liturgy. The renovated Christian historical monuments from Syria, known throughout the Christian world are a great proof about the freedom of Christians. Damascus is the see of 3 patriarchs, that is, it is the city with the greatest number of patriarchs in the world… Nothing forces these patriarchs to have their see in a country that persecutes them. I lived in Romania for 7 years and I tell you honestly that I do not think that the Romanian Christians have more freedom than the Syrian Christians, except for being president, which is reserved to the Muslim. Only after the beginning of the so-called revolution the problems for the Christians started. Many Christian villages were attacked by the extremist terrorists. Many Christians were forced out of their houses; many were killed just because they were Christians. Now as I am speaking with you a Christian village, Maaloula is attacked by the foreign, not Syrian, terrorists. Yesterday they attacked two monasteries from that village; they destroyed a church and an Aramaic language school. This never happened before the so-called “revolution”. The Church in Syria says that the number of Christians killed in this war is over 4 200; 21 churches and 8 monasteries were destroyed, and there are over 7 000 kidnapped Christians. We Syrians got into this situation, we who were so proud that we lived in one of the most peaceful countries in the world.

What do you, your family, your friends in Syria think should be done in order to stop this civil war? Should the US, France and Israel intervene as they want to? Would this be a solution?

None of us thinks we need a military intervention… We saw what the Americans did when they invaded Iraq. The solution is that the West stops supporting the terrorists and that Turkey keeps its borders closed. Let our country live, let my people live. Syria throughout time taught the world the Power of Civilization, not the Civilization of Power. It is only this that I want to tell to the whole world.

Did you feel in these months of nightmare a minimum support from the Romanian authorities for the Romanians in Syria?

Being a Syrian I couldn’t answer to your question. But I know of a case when a Romanian woman from Syria needed help from the Romanian Embassy and didn’t get it.

Why don’t you return to Romania? Is it better in Syria?

My family suffers in Syria, my people suffer there, and my Church suffers there. My Syrian-ness, if I can say so, would not be fulfilled if I do not partake of this suffering.

I know that what I told you may come as a surprise to you, because you are manipulated by the mass-media. You have the right to believe me and you have the right not to do it. But, believe me, I recounted the suffering of a Syrian who lives through this experience and who is facing death every day.