[ditty_news_ticker id="27897"] Analysis: An End and a Beginning in Chicago 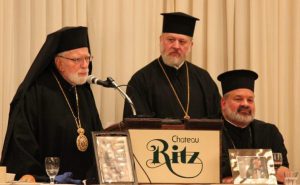 His Eminence Metropolitan Iakovos, with His Grace Bishop Demetrios (right) and Father Apostolos Georgiafentis (standing) greet the crowd and student “Agrafon” award recipients at the 2014 Hellenic Letters Luncheon in Chicago.

On June 2, Metropolitan Iakovos fell asleep in the Lord. He was 89. It all happened so quickly, in just two days from the time he felt ill. He is the second hierarch in a very short period to pass away, and at an advanced age. Metropolitan Philotheos of Meloa died just two weeks earlier, at 93.

Metropolitan Iakovos’ departure – he served the Chicago Metropolis for 38 years – marks an end for the local Church of Chicago and a new beginning will soon be inaugurated.

It is widely known more or less what has gone on in the Metropolis, especially over the last ten years. I will not go into details today. Simply let me remind everyone here that the Metropolis is big in numbers, money, and expenses. The potential was huge, but not realized.

It is imperative that the Metropolis should exit from its downhill and withering situation and be reborn. That presupposes the election of a hierarch who is gifted, competent, and ethical in every aspect of the word, and certainly prudent and humble, and who will act in a healing way. A hierarch who will embrace the people, inspire the priests, and cleanse the malodorous situation.

The problems are known both to the Archdiocese and the Ecumenical Patriarchate, the latter having the last word on “the ecclesiastical affairs in America” and, of course, bearing the responsibility. I have the impression that many times the Archdiocesan leadership here wants to act in certain situations involving high ranking clerics, but there are factors from “above” preventing that.

For now, and based on my knowledge of the situation, Chicago is boiling, and in the case of an improper hierarchical election, one worse than the former one, it would explode.

A repetition of Archbishop Spyridon’s term of only three years is not out of the question.

Thus, His Eminence Archbishop Demetrios Geron of America, the local Eparchial Synod, which will select the three person ballot and indicate the “protégé” for the succession in the Chicago Metropolis, and certainly the Patriarchate, should be extremely careful. Actually, let’s not kid ourselves. By “Patriarchate”.

I mean Patriarch Bartholomew himself. He decides, the Synod simply rubber stamps.

Let us be attentive, because our times are extremely difficult. Parishioners know much more about the ecclesiastical leadership than the latter realize. Our Greek-American community cannot afford to go through new ecclesiastical crises and turmoil. We already are in a condition of advanced indifference to the extent of apathy within our churches, which are almost empty even on Holy Friday evening and the Resurrection night.

Financially, the “cash cow” – i.e., donations and contributions, is drying up. It is decreasing at a nightmarish pace.

In many instances the priests do not act or behave “as stewards of the mysteries of God” and as “good shepherds,” but as strictly religious executives with bankers hours, and then via e-mail or by appointment only. Of course, there are some notable exceptions that salvage the sacrificial conciseness of the holy priesthood.

Many parishes are deteriorating because of the priests and/or the permanent and incompetent members of parish councils who have been glued to their chairs so that the council membership remains unchanged.

As long as the metropolitans continue to receive their high salaries along with extra income from the sacraments and Sacred Services, and priests also enjoy high salaries and “tips” from weddings, baptisms and funerals, and also work on the side as businessmen and owners of real estate, any change seems like an intangible dream. If the “almighty dollar” ceases to fill the coffers and the pockets, then the big challenge will start, but it will be too late.

Chicago will be the indicative sign as to where the Church in America will move and in what direction. The responsibility belongs to all of us, but especially to those with who have “the beards and the combs.”

Letter to the Editor: Criticism of Kalmoukos’ Analysis

I am offended by the article that appeared online on June 5, Analysis: An End and a Beginning in Chicago by Theodore Kalmoukos. The late Metropolitan Iakovos only just passed away and I find it very disrespectful and in poor taste to badmouth a deceased person. Many people held Metropolitan Iakovos in high regard for his years of service.

I don’t know where Mr. Kalmoukos gets his facts, some closed door meetings, perhaps, but when he makes broad statements about the church and the youth not attending, I see hundreds of young people signed up for camp this summer and thousands participating in youth events year round.

Of course, there are some issues that the church must deal with, but my Yiayia taught me not to speak ill of the dead.

I would like a response from Mr. Kalmoukos regarding his article.