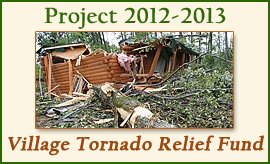 His Eminence Metropolitan Philip has tasked the Antiochian Orthodox Christian Women of North America (AOWNA) with a new fundraising project for 2012-2013, “The Antiochian Village Tornado Relief Fund.” Between 2010 and 2012, the AOWNA women in chapters across the U.S. and Canada raised over $315,000 for the Convent of St. Thekla at the Village, and will now turn their attention towards another project to benefit the Archdiocese’s “Holy Mountain.”

In the late afternoon of June 1, 2012, a tornado with winds of 110 mph cut a wide swath through the Village grounds in Bolivar, PA, damaging over fifty acres. Thankfully, no camp counselors or staff received injuries, and no outside groups were using the Village at the time. However, the tornado damaged 600 trees and twenty-two buildings; four of the buildings were completely new cabins set to house sixteen girls each. The remaining buildings incurred extensive damage requiring varying degrees of repair, from new roofs to collapsed walls. Because of the destruction, sixty-four of the girls who attended Summer Camp bunked at the nearby Conference and Retreat Center.

The damages, according to the archdiocese’s insurance adjuster, totalled over one million dollars, and while the Archdiocese has an excellent policy, extra funds are still needed, since the insurance will fall short of total coverage for all the necessary repairs. Explained Vice President/NAB Project Coordinator Dianne O’Regan, “We have been informed that the priority is to rebuild the four girls’ cabins followed by the other buildings that were destroyed….everyone in the parish—men, women and children—should know about the project, and be reminded that every woman who is a member of the Archdiocese is an ‘Antiochian Woman.'”

Download the “NAB Instructions for Diocesan Officers,” or the “Talking Points at the Village,” and read further information.