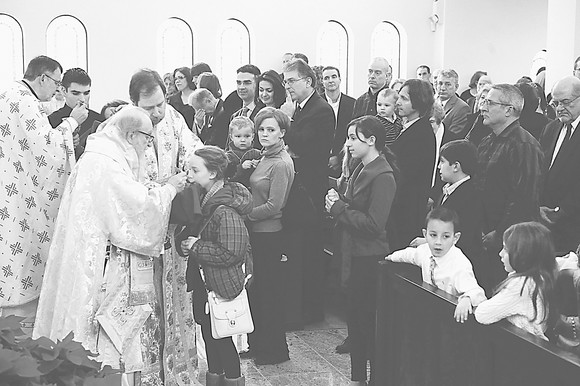 TNH/COSTAS BEJ
Archbishop Demetrios, who presided over the Divine Liturgy, and Fr. Peter Karloutsos, the pastor of the Church of the Assumption, offer Holy Communion on December 16.

NEWTOWN, CT – Archbishop Demetrios of America changed his schedule and instead of making a pastoral visit to the Archangel’s parish in Stamford CT, he went to the neighboring parish of the Dormition of the Virgin Mary in Danbury, close to the area that the massive killings of 20 small children and 6 adults were assassinated by 20 year-old Adam Lanza. Demetrios went to Danbury accompanied by his Chancellor, Bishop Andonios of Fasiane.

The Archbishop officiated at the Divine Liturgy and he offered a memorial prayer for the innocent victims.

Demetrios said in his sermon that the massive killings is “an unprecedented tragedy, illogical and diabolic” and he called for “measures of security for the children.”

The atmosphere in the Church was deeply sorrowful. A general sadness was visible in the faces of everyone in the congregation. Parents were holding their crying children in their arms.

Among the congregants present was Michael Cech, the husband of Yvonne Cech, the librarian of the school at Newtown, who saved 18 children and 3 adults.

Demetrios told the congregation that “the city of Danbury is very close to Newtown, where on Friday and unprecedented tragedy took place. Twenty small children and six adults, the entire school was hit. We heard President Obama with tears in his eyes and many others and it was very difficult to comprehend the magnitude, the irrational and diabolical [nature]of the whole tragedy. The result is that 26 families, the broader community of Newtown, and also the surrounding communities have been influenced by such an event.”

He also said, that, “when we heard the news on the television on Friday and saw the scenes, we communicated with Fr. Peter (Karloutsos) because Danbury is very close to Newtown.”

Demetrios mentioned that “in that school there were two children and two teachers. We knew that one teacher was safe, but we didn’t know about the other one and the children and we had great anxiety. Finally, we learned both teachers and the two children were not among the victims, but the tragedy remains for the rest of the students who were killed and for the other children who survived. One of our teachers [Yvonne Cech] did something very heroic as it was reported from the very beginning, but they didn’t say that she was Greek-Orthodox. She gathered the children and she hid them somewhere in order to protect them from the deadly bullets. This community, meaning you, stand by the side of the victims and I want to express the gratitude and the commendation of the Church to Fr. Peter, to the teacher and to the entire parish who supported the victims of this tragedy.”

Demetrios concluded his sermon by saying that “we pray to God to give comfort and healing to the souls of the parents and relatives of the students who were died. We also pray that God helps the adults to take measures of safety for the children.”

Diplomatic representatives of Greece and Cyprus were present, as was Aphrodite Skeada the president of the National Philoptochos Society of the Archdiocese.

Translated from the original Greek.